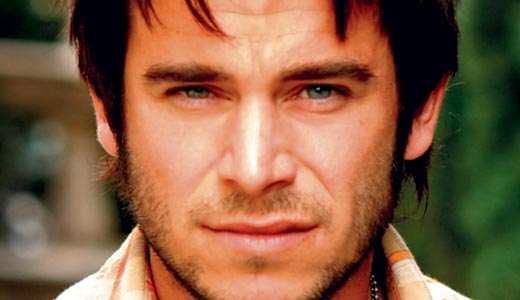 The spirit of Samuel Beckett is not dead. Want proof? “Alphonso Bow” is your best bet.

In the spirit of plays like Beckett’s “Waiting for Godot,” Louisville poet and screenwriter Mike Sarki takes the simple premise of a lunch conversation between two men — abrasive, opinionated Alphonso Bow (Jeffrey Pierce) and his older, more passive comrade Frank (Michael Dempsey) — and spins it into an outrageous 107-minute film.

While talking entirely too loudly in a family restaurant, the two men touch on the subjects of sex, religion, life on other planets, Hitler, Beckett himself, a severely injured dog, early childhood behavior and so on.

“Never underestimate the power of good conversation,” the film’s trailer tells us, a philosophy Sarki has clearly taken to heart.

The film, shot over six days in 2008, recently screened at the Dances With Films Festival in Los Angeles. The project also represents the blossoming collaboration between Sarki, who has three published collections of poetry, and his son, Lije, who directed and produced the film.

The two Sarkis will work together next on the indie flick “Get She Water,” which begins casting in June. As for “Alphonso Bow,” Lije says he plans to shop it around some of the middle-tier festivals, having been turned down by many of the majors, with hopes of eventually screening the film in Louisville, where it is set.

LEO: How did this project come together?
Mike Sarki: “Get She Water” was written first. Lije had asked me to write something that we could work on together. We shot a trailer for that, and while he was trying to get the financing together to make the film, I had the idea for “Alphonso Bow.”

LEO: What was it like for you guys to collaborate with each other?
Mike Sarki: My son is the director, but I’m the boss. It was my script and I didn’t relinquish any control. He’d want to alter something, and I’d OK it, or we’d argue it out. He had control over how he wanted to shoot it though. I also didn’t have a problem with people going off script if they had a better idea.

Lije Sarki: My dad is pretty stubborn about people changing his work. He’s gotten better though. He is more open now to people suggesting things.

LEO: As a dialogue-heavy film, it hangs on the quality of the actors’ work. Were you happy with the finished product?
Mike Sarki: The acting is really strong. Jeffrey Pierce is very good as Alphonso. In his previous roles, he has played a lot of villains, and here he gets to play more of an anti-hero. It’s a big deal for him because he hasn’t really had a breakout role yet. In the audition process, there was something about him that screamed “I am Alphonso.”

LEO: Why was the film’s premise so interesting to you?
Lije Sarki: I’ve had weird conversations like this before, and I relate to them completely. It is one of those movies where I hope people will argue afterward about the things that the characters say. As long as the movie does something for you, then we win.