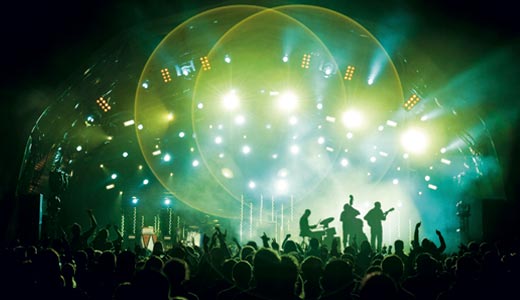 According to Rupert Stevens, events director for the Louisville Jazz Society, more than 400 people came out to see the Dave Holland Trio, who played a free show at Waterfront Park.

“We’re delighted at the amount of people who came out,” he said. Stevens, who has been with the Louisville Jazz Society for eight years, attributes the turnout to the collective’s promotional efforts and the low ticket price. “I’m excited that the city is again appreciating this uniquely American art form.”

Primitive forms of jazz originated in New Orleans in the late 1800s, an amalgamation of African, European and Creole cultures. Jazz was instrumental in various cultural and social movements in the first half of the 20th century, such as the Harlem Renaissance.

After the advent of fusion and avant-garde styles, however, the jazz culture shifted its focus from a populist form of dance music to appeal more to upper-middle class, NPR-listening, slightly liberal, granola-eating, Mac-consuming demographics and Utah basketball fans.

As Stevens is quick to point out, Louisville is no stranger to jazz. As early as 1910, jazz served as riverboat entertainment, and the classic Madrid Ballroom played host to acts such as Louis Armstrong, Duke Ellington and Benny Goodman. Today, jazz pops up at various celebrations hosted by the Louisville Jazz Society, Louisville’s vast array of coffee shops and bookstores, extracurricular activities at well-funded East End schools, and even on the Sunday playlist of WFPK-FM.

“Our Sunday jazz series really livens up the programming,” said WFPK program director Stacy Owen. “Jazz is very edgy compared to our emphasis on sophisticated, candid singer-songwriters and white blues. We’re tremendously proud to be trailblazers in the community.”

The success of the Dave Holland Trio’s performance is also a sort of healing process for Stevens and the Louisville Jazz Society. Many still remember with infamy the tent collapse at the group’s 2006 Help The Kids Gala with Dave Brubeck, responsible for the deaths of nearly half the city’s record store employees and music professors.

Sunday’s performance went without a hitch, and the crowd was attentive and enthused.

Jared Flatts was one attendee. “I really wanted to support these guys and come out to see this uniquely American art form,” Flatts said. “Also, chicks dig dudes into jazz. Pulling out some facts on the Monks or Coltrane makes you look intelligent and sensitive. It puts insurance on seeing about some ass, ya know?”

As for the future, Stevens and the Louisville Jazz Society will continue to host free shows, as well as events for younger audiences. “We’re wanting to get some blues shows together for the kids,” he said.