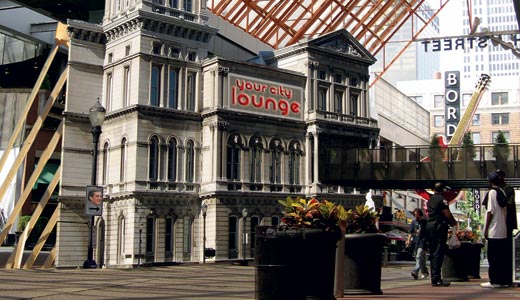 Scheduled to open later this summer, the new tenant of Fourth Street Live, dubbed Your City Lounge, has been vaguely advertised but is creating a lot of buzz downtown.

Preliminary plans list a wellness center, neighborhood cleaning company and 24/7 public security department, among other services YCL will provide to customers. Though many are eager to peruse the new downtown businesses, critics say the Cordish Cos., the developer of Fourth Street Live, has staged an open coup d’état with the mayor’s blessing.

“The administration has finally sold the city to Cordish,” says Metro Councilman Kelly Downard, R-16. “You can’t even get a quorum in council chambers. Everyone is hanging out at the Your City trying to get a job, and it isn’t even finished being built yet.”

Downard might be the last Metro man standing. Since the Your City announcement at least three committee hearings have been cancelled, and half of the Democratic caucus resigned after being offered plush managerial posts at Your City.

Mayor Jerry Abramson said any similarities the Your City establishment has to legitimate city services are coincidental. He denied accusations that the Baltimore-based developer was preparing to take over the city.

Besides mimicking city services, the new lounge has also hired several former government employees who were laid off as a result of the city’s projected revenue shortfall. The administration eliminated more than 500 Metro government positions. Immediately after, Cordish announced Your City picked up the slack by creating 400 full-time positions that will need to be filled before its launch in late July.

“For the past six years, the city of Louisville and the Cordish Cos. have had a wonderful public/private development partnership,” says Chad Carlton, a Cordish Cos. spokesman, who formerly worked in the mayor’s office. “If we connected the people of Louisville back to downtown, why not help connect them back to government?”