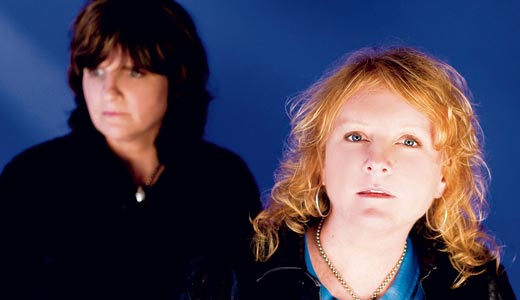 Amy Ray and Emily Saliers first met on the playground outside their elementary school in Decatur, Ga. It would be several years before the duo began making music together, first at high school talent shows, and eventually at cramped venues in and around their small Southern town.

Now, more than two decades after their first release, the Indigo Girls are on tour promoting their latest album, Poseidon and the Bitter Bug. The duo stops in Louisville on Saturday, headlining the Kentuckiana Pride Festival.

LEO: Is there a dominant theme on your latest album?
Amy Ray: I think the songs are reflective on different aspects of life, which I guess is pretty much what art does. For Emily, she feels like she was going through hard times, and she’ll say kind of middle-age angst, when she was writing. For me, with these songs in particular, I think I was just reflecting on human nature and the way the world works.

LEO: You’ll be playing Pride Fest when you come to Louisville. Is there a different kind of energy at this type of event?
AR: Pride festivals are often just really fun and a day of celebration, especially in the South, where we know what it’s like to sort of live against the grain for most of our lives. There’s a certain relationship you have to where you live, regardless of whether you are accepted or not. But I think it’s a day to just be proud and not be burdened by that and celebrate who you are.

LEO: There were recently nationwide protests in response to Prop 8 being upheld in California. Do you think this movement is gaining momentum?
AR: That was a really big let down, the Prop 8 thing, but I definitely think the marriage fight is gaining momentum. I remember when Emily and I first started playing Pride festivals, like ages ago in Atlanta, it was very politicized and activist-oriented because there was so much to be fighting for. There really still is, but we’ve gotten a little bit of victory and, culturally, a lot more acceptance, even though there’s a disconnect legislatively … I think younger people today tend to be more accepting, but I still think it’s important to remember the activist bent of things.

LEO: In recent years you’ve done a lot of solo work. How does that experience compare to what you do with Emily?
AR: It’s really electric and influenced by indie bands and punk and rock. Logistically, it’s really different as well: I make records when I have a break from Indigo Girls; I try to spend as little money as possible; we work mostly in little basement studios; when I tour, I’m in a van pulling a trailer and we’re driving ourselves; I lose money and have to figure out how to support the tour. It’s a very different thing, because with Indigo Girls I’m making a living. The solo stuff is definitely a labor of love …

The part of touring I enjoy most is seeing the landscape go by and the camaraderie of my friends and loading my own equipment and the challenge of the road. I really feed off that. Touring with Indigo Girls is a whole other ball of wax, but if I didn’t do one or the other I’d miss it.

LEO: What’s your favorite song by Emily?
AR: Wow, there are lots … I still think “Closer to Fine” is just a classic song … There’s a song we get a lot of requests for, actually, but we don’t play it that often because it’s a pretty hard song. It’s called “Ghost.” I think that song is incredibly crafted and has a beautiful melody.

LEO: What are you listening to?
AR: There are people we’ve taken on tour lately because we liked their record so much; Anais Mitchell is one of them. Her record is beautiful. Righteous Babe — Ani DiFranco’s label — put it out. Then there’s a band — they’re probably never going to play the United States again — called Detroit 7, a Japanese punk band. I saw them at South by Southwest and luckily I got their record. They just blew me away.

LEO: You recently saw Bruce Springsteen. How was that?
AR: Oh man, I love Bruce. It definitely gave me tons of energy for our tour. For me, he’s just got so much soul, and he has fun every time he plays. I don’t know what he’s thinking in his head, but it seems like he’s really seizing the moment and having the best time he can and embracing his audience. He plays with a sense of reckless abandon, and there’s a lot to learn from him.