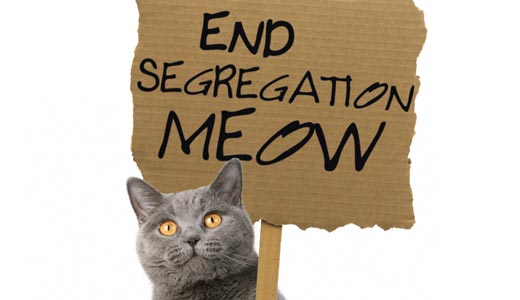 Citing a “history of institutional discrimination against feline Americans,” local cats are suing Metro Parks over segregation at Cherokee Park’s Dog Hill. The class-action lawsuit, filed in U.S. District Court in Louisville, demands that cats be granted full access to all areas of Metro Parks and proposed a new name for the site: Hill. The cats also seek punitive damages, including a lifetime supply of Fancy Feast Elegant Medleys Wild Salmon & Egg Soufflé, plus a headless robin, which “we are going to bat around, right after this nap.”

Metro Parks attorney Chase Frisbee called the lawsuit frivolous. “Cats are welcome in our parks,” he said. “It was never our intention to exclude them. We aren’t aware of a single instance of a cat being denied access to Dog Hill. I mean, how could we keep them out? They’re cats! Pardon my French, but what a bunch of pussies.”

Duke, a German shepherd mix who visits the park often, saluted the cats’ effort to secure their rights. “Good public policy seeks to stamp out segregation wherever it rears its ugly head,” said Duke. “Even if the parks’ bylaws don’t mandate bigotry or exclusion, they may unwittingly foster discriminatory behavior by supporting negative social norms. Why are you looking at me like that? Is it because I’m a dog and I’m talking? That’s a mighty highfalutin attitude for someone who can’t even lick his own balls.”

Claims made in filing a lawsuit present only one side of the case.