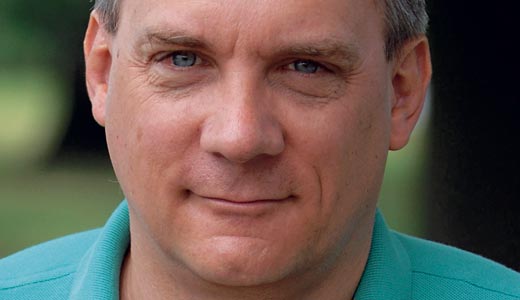 Paul Griner’s students at U of L, where he has taught for 13 years, regard him as highly as his readers do in the wider world. In the same way that his style never gets in the way of his subject, his personality does not get in the way of his teaching. Just as the man in person is charismatic without being flashy or vain, his words on the page transport you to whole other worlds without calling their own attention.

Griner’s works are translated into other languages and are read, by and large, outside academia. Among his admirers are fellow national award-winning writers Tobias Wolff, Leslie Epstein and Dan Chaon. Griner’s new novel, “The German Woman,” published by Houghton Mifflin Harcourt, seems destined for the widest audience of all. It couples the scope of the most ambitious WWII films with the page-turnability of a spy thriller.

In order to write it, Griner first had to conduct a prodigious amount of research. Over a three-year period, he read scores of British, German, Austrian, Polish and American women’s war memoirs for background on his central character, Kate Zweig. For another character, Claus, he watched hours of old films (silent and otherwise), read first-person accounts of English and German spies, and listened to recordings made by Air Raid Wardens and survivors of the V-1 bombings about their experiences.

“To take a break from all that,” he says, he’d “go to the library and leaf through old newspapers for hours on end, studying the ads and the local news, or I’d listen to music that Kate and Claus might have heard.” Some break. Yet not a page of “The German Woman” comes across as an over-researched historical novel.

It opens in 1919, when Kate and her husband, Horst, are taken for spies by Russian soldiers and forced to flee their field hospital on the eastern front, barely escaping alive. For 15 years thereafter, English Kate makes her life in Hamburg. In the novel’s second half, set in London during the Nazis’ V-1 reign of terror, Claus spends his days making propaganda films and his nights as a spy, worn down by the secret life. Claus and Kate, layered over with their painful pasts, fall into a love fraught with doubt. It is an action-packed exploration of questions concerning loyalty to self, country and fellow humans.

In his mind, Griner, who calls himself “a lapsed Quaker,” had been exploring the novel’s underlying ideas since age 16, when he came across what he now knows to be “a fairly often-cited line by E.M. Forster: If I had to choose between my country and my friend, I hope to god I’d have the guts to choose my friend.” This became the book’s epigraph.

Griner means for the novel’s themes to pertain to the here and now as well: “the echoes of the cry of ‘traitor’ during war time for the least bit of doubt, and what life must be like in Kabul and Baghdad and Mosul under the threat of constant war.” He believed that the most effective way to show this in the novel was through the illustration of the relationship between the First World War and the Second — and how Kate and Claus’s divergent experiences scarred them differently.

When WWI began, Griner explains, “citizens of almost every nation involved welcomed it — spontaneous mass demonstrations in support of war broke out in Paris, Vienna, Berlin, Moscow and London, and hundreds of thousands of men instantly volunteered, afraid that otherwise, the fighting would be over before they got a chance to experience it. When WWII began, citizens the world over reacted far differently; they knew what was coming, and they dreaded it. Kate and Claus are creatures of that world. To understand them in 1944, you have to know about them in 1918.”

Despite all of their pain, it’s a world the reader is reluctant to leave behind.

Excerpts from “The German Woman”

She avoided a puddle and looked with great satisfaction again at her new shoes. Foolish, how good they made her feel, but it was true, they did, a bit of brightness in a dull and deadening world. And wasn’t that what they were searching for on these endless foraging expeditions, not just food and fuel, warmth and light, but tokens from their own past, buried under the decade’s rubble? If not for hope, at least for its possibility?

Bertram plucked a pear from his desk and turned it in his hand, giving Claus one of his rare smiles, which were always disconcerting: his teeth were so small they seemed nonexistent, his mouth mostly red gums, as if he’d just eaten an especially bloody meal. Claus was saved from contemplating it further by the clock striking and the cuckoo shooting out, launched into its hourly frenzy. Inside its chirping beak was a miniature camera.

He thought, not for the first time, that she’d missed her calling: a born schoolmistress, meant to intimidate students into acquiescence, and if he ever needed such a character in a film, he’d be sure to cast her. He felt a peculiar mounting pressure in his chest, which he at last identified as pleasure. In the situation, in knowing that his landlady suspected him, in teasing her by not hurrying her along. Kate understood what was necessary, but of course she might grow disoriented in the dark and stumble backward or simply have to shift or sneeze, and he had a wild fantasy of what would happen if he was thrown out. London was emptying, he could always move into Winifred’s building, or Kate’s; the apartment below hers was vacant. I knew there was a reason I loved you. He’d be re-inhabiting a younger, less fearful self.