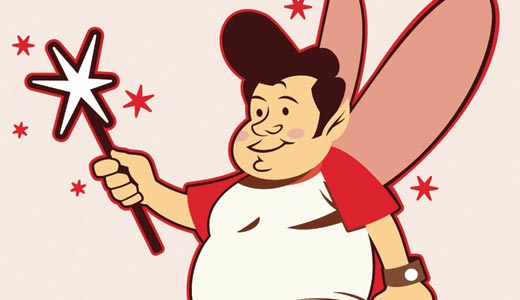 ‘The Fat Man Cometh: The Secret Homoerotic Life and Times of Jerry Falwell, as told to Rusty Sharpe’

Those in the know (i.e., the typical LEO reader) will instantly recall that Rusty Sharpe was the name of Rush Limbaugh’s first radio persona, when he was a mere 16 years old. After the young Rush flunked out of college, following the failure of the last Pass/Fail course he was permitted to take (Ballroom Dancing), he managed to avoid the Vietnam draft by coming down with a condition known as Pilonidal Disease, characterized by an abscess on the cleft of the buttocks — the very condition that later led to the bloviator’s abuse of the opiate OxyContin.

It was during this painful period of acute ass-tingling and scholarly ineptitude that Limbaugh began an epistolary relationship with the Rev. Jerry Falwell. The fulminating preacher from Lynchburg had recently founded his renowned Liberty University and could not have been more delighted to take under his (extreme right) wing an up-and-comer who had not knuckled under to the hippiedom of the era. Soon after their correspondence began, Limbaugh moved eastward from Missouri to Pennsylvania, where ostensibly he took a job as a Top 40 radio DJ, but in truth, as he explains in the intro to “The Fat Man Cometh,” he wanted to be within driving distance of his mentor so that the two of them could meet in person as often as possible.

In his very first letter to the portly man of God, Limbaugh asked for a clarification of one of Falwell’s most famous quotes: “Grown men should not be having sex with prostitutes unless they are married to them.” Did this mean, the younger wanted to know, that it was OK to marry a whore? The exchanges that followed his query, concerning Tammy Faye Bakker (the wife of then-Rev. Jim Bakker), are not fit to be printed in a non-pornographic publication. Suffice to say that the language used by both proselytizers not only upped the ante on frank dirty talk in general, but on the growing magnetic attraction between the two of them.

The fact that Falwell is also famous for his frequent admonishment — “Christians, like slaves and soldiers, ask no questions” — had remarkably little bearing on his relationship with Limbaugh. Indeed, the most interesting thing about his confession is that most of it happened by virtue of the fact that for once in his life, Limbaugh managed to shut the fuck up Donny and actually asked a ton of questions rather than engaging in the endless prattling for which he is known by his legion of radio fans.

But a second factor is responsible as well. Before the dawn of “hillbilly heroin,” Limbaugh (due to his ongoing posterior pustule) was no dupe when it came to prescription painkillers. He understood from an early age that oxycodone, a key ingredient in Percocet, was a force to be reckoned with. It was the very force that fueled the publication of this book.

To find out how the younger blusterer got the older blusterer to spill all of his non-vanilla beans on the last day of the Reagan Administration, search high and low for your own copy of this now out-of-print volume from Bloviator Press. Only a thorough read-through will lead you to an understanding of what Falwell actually meant when he pronounced, “Homosexuals are brute beasts.”