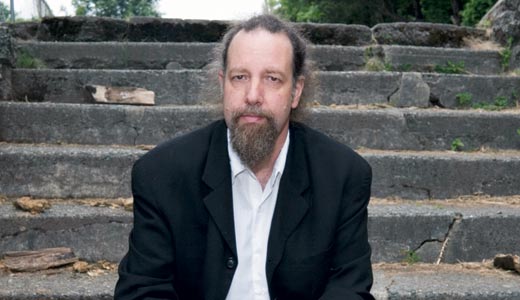 Richard Bishop is still getting used to being a solo artist.

The former Sun City Girls guitarist watched that group disintegrate in 2007, after the death of drummer Charlie Gocher. Bishop, who played in the band for more than 20 years, has been releasing solo albums for 10. His latest, The Freak of Araby, is a guitar opus.

A frequent traveler and student of the Far East, Bishop infuses his music with old-world spirituality and feeling. We caught up with him via phone in Athens, Ga.

LEO: So how is the tour shaping up?
Richard Bishop: It’s getting better every night. In the first couple of shows, we were
all wondering how it was going to work. I really like not having to provide all of the sounds. I also like getting to play off of other people. Things can go
wrong, but they often lead to things that are more interesting.

LEO: How was it going from playing with the Sun City Girls, who you were with for so long, to playing with completely new people?
RB: It was a little weird in the beginning to play electric music with other people. With Al and Charlie, we all knew how the other thought and played. With this new band, I’ve actually had to teach people some of the songs, which I’ve never had to do before. It isn’t as automatic as it used to be, but it’s good in its own way.

LEO: The Egyptian influence is more pronounced on Freak of Araby than it was on your previous records. Why was it so much heavier this time around?
RB: Most of my inspiration for the record came from an Egyptian guitar player named Omar Korshid. He would play a lot of classical Arabic guitar parts with electric guitar as the main instrument. The sound was really clean. Once I listened to some of his recordings, I decided that I wanted the whole record to sound like that.

LEO: How much of Araby is improvised compared with your other records?
RB: Not much. Improvika was 99-percent improvised. Polytheistic Arrangements was about half and half. I didn’t want this record to sound improvised at all. I wanted it to be coherent. Live is a different story though. You need some open space when you play these songs live, so it isn’t the exact same thing every night.

LEO: Have you ever written lyrics for your music?
RB: Never. I’ve tried writing lyrics throughout my career and they’ve just never satisfied me. Whatever I’m trying to communicate on my instrument comes through better without lyrics. Some of the Arabic music I listen to feels the same way. It has lyrics in another language, and I don’t understand what they are saying, but I’m inspired nonetheless.