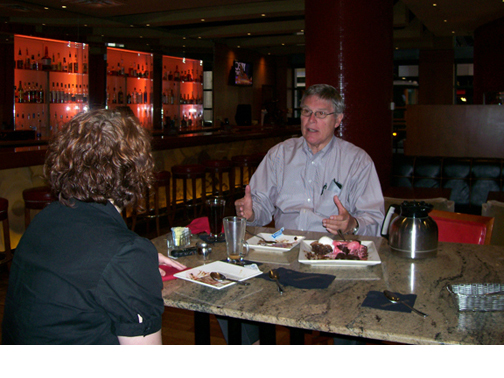 When I got a breakfast invitation from Bill Samuels Jr., the president and CEO of Maker’s Mark, I was flabbergasted. Was I being rewarded for my years of service? Was he going to ask me to become an official taster? Were we going to drink before noon? Unfortunately, none of those was the case. But I did get a great opportunity to sit down with the man behind my favorite bourbon and talk about everything from the right way to make a Manhattan to his thoughts on the rise in tax on Kentucky spirits.

I met him on a Tuesday morning at Maker’s Mark Lounge at Fourth Street Live. He seemed genuinely interested in having a thorough conversation, so we started with the new vice tax, a major concern for all bourbon distillers in Kentucky. Our state makes more than 95 percent of the world’s bourbon, yet it ranks highest in excise alcohol taxes compared with neighboring states, and is 60 percent higher than the national average. As of April 1, the Kentucky sales tax on liquor increased. These rising “sin taxes,” as they’re often called, threaten the bourbon industry and seem a bit too harsh and unfair, if you ask me.

But let’s ask Samuels: “I could sit here and be a typical industry person and complain that it’s OK to tax everyone, but just don’t tax me. That’s not where this is coming from,” he says. “I don’t think there are any of us in the industry who feel like we’re special or we don’t need to help carry our load. If the products of the signature industry are taxed at the median that the other states tax, we can do that. When distilled spirits come to the point where they’re taxed higher than other states, it makes it awfully difficult for us to defend against tax increases in other states. The minute our General Assembly raised that tax, there were 32 other states that pre-filed tax increases. If you can’t defend it in your home state, you’re going to be perceived as weak — you’re an easy mark.”

Samuels brings up an inner struggle Kentucky seems to be having with itself — whether to respect or be ashamed by our bourbon heritage. With half a million visitors a year to the Bourbon Trail, he says there is great opportunity here to mirror what wine does for California’s tourism.

“Kentucky’s gotta decide if they’re embarrassed by the bourbon industry or if they want to embrace it and be proud of it. I think it needs to be a public discussion,” he says. “We have a 100-percent monopoly on this market — unlike thoroughbreds, unlike anything else. And we’re treating it like it’s a sin here in Kentucky. It’s very strange.”

As the breakfast continued and the fare (including bourbon balls and a plate of chocolate pastries with ice cream on top) was served, we talked about our affinity for John Yarmuth, my familiarity with his product and his No. 1 hangover cure (“Moderation. Works every time. As my dad used to say, ‘Son, we’re making this stuff to sell, not to drink.’”). I left a little dizzy from all the sugar and talk of important matters, but I felt a bit more enlightened about the traditions, heritage and importance of the amber-colored liquor we should proudly stand behind (and underneath) as Kentuckians.

The kind beer pushers at Flanagan’s Ale House are hosting their first-ever Craft Beer Festival on Sunday, June 7, from 2-5 p.m. There will be representatives from 35 to 40 breweries from across the country offering samples, says manager Ashley Isaacs. Participants will get a tasting glass and three hours to make their way, sip by sip, through the Highlands pub. They’re even closing Morton Street for the festivities. Breweries confirmed to show up include Bells, Dogfish Head, Founders, Upland, Schlafly, Magic Hat, Delirium Tremens, Great Lakes, Goose Island, Chimay and many more — including, of course, our local brewers. Tickets are $45 and are on sale now at Flanagan’s. A portion of the proceeds will go to the “Pints for Prostates” campaign that raises funds for the International Prostate Cancer Education and Support Network.

Check out my liver’s daily reasons to drink at barbelle.leoweekly.com