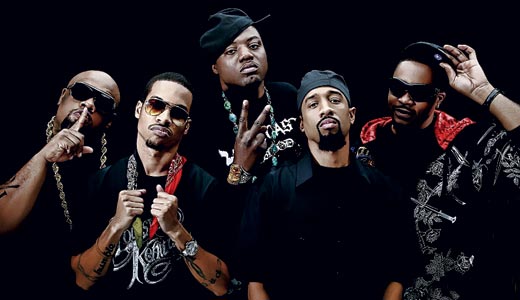 Nappy goes political? Skinny DeVille tells LEO the Nappy Roots will soon be releasing a scathing diss aimed squarely at Mayor Jerry Abramson and the Metro Council. Upset over the expansion of Louisville International Airport and UPS and local government’s use of eminent domain in displacing area residents for private business growth, the group takes Outkast’s “Bombs Over Baghdad” (B.O.B.) beat and repurposes it for “Planes Over Preston” (U.P.S.: Usurping Personal Space).

Local rapper reaches new heights
After interviewing countless rappers, one claim that is made by nearly every emcee is that their current release is taking them to the “next level.” No rapper has to date explained what or where exactly this is, and this mythical place always seems to be snagged by another rapper’s even newer album and the claims that theirs is beyond even that, dare I say, the “next” next level. Last Thursday night, however, local lyricist Lou Evil ascended. Yes, as in rose up from the ground, floated to the sky, and in a blinding flash of light, blinked out of our realm and into the next.

Lou Evil may be a familiar name to some from his early success with 502 Fedz, a rare all-law enforcement rap group featured on BET’s “Rap City” (who can forget their infamous battle with Chubb Rock and Def Jef, leading to Jef’s later arrest?). Lou was at Wick’s Pizza’s hip-hop night freestyling for nearly 45 uninterrupted minutes Thursday night when the lights flickered and speakers went silent. The nearly 300-pound emcee, according to witnesses, then began to levitate from the small stage until his ascension.

Metro Police Chief Robert White insists on conducting an investigation into Lou Evil’s “disappearance.” He, apparently not a hip-hop fan, doesn’t believe rappers can truly make it to the “next level.”

“It’s a bunch of nonsense,” he says. “Sergeant Louis Bonneville has been a dedicated officer for 18 years with the LMPD, and whatever he happens to do on his off-time surely has nothing to do with his disappearing. We’re looking into a number of leads.”