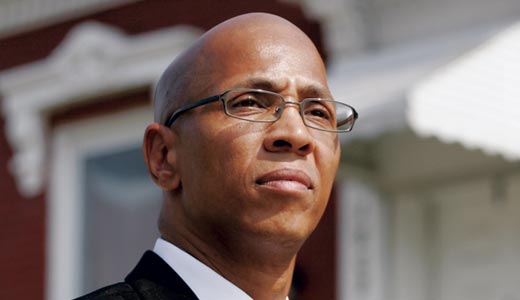 Dressed in a crisp, freshly tailored suit, Christopher 2X paces back and forth in front of the emergency room entrance at University of Louisville Hospital, head down and mumbling to himself. He stops when a family of four approaches. Before they see him, the activist adjusts the thin frame of his glasses and slaps on a wide smile. But it’s just a badly sprained ankle after an accident at the Extreme Park.

“They don’t need a spokesperson either,” 2X says. “The lack of homicides that have manifested in the community means families are not searching for the spirit of reconciliation.”

It has been two months since the once-ubiquitous activist was last seen on television or quoted in The Courier-Journal. Since April, the city’s homicide count has remained stagnant. The number of assaults, robberies and shootings is down. According to police reports, violent crime in Louisville has declined by 22 percent compared with last year.

And while many are rejoicing the downturn, the dearth of high-profile tragedies has left the well-known community leader searching for anyone dealing with tragedy.

“Things have gotten real bad for Christopher. Last week he was a spokesman for a guy who tripped and fell on Second Street. Just yesterday he bragged about breaking up a fistfight — among kindergartners,” says Cary Meachem, a funeral home director who promoted half-off mortuary services with 2X in his heyday. “I hate to say it, but he’s going to have to find a real job.”

Standing proudly with the family he met outside University Hospital a few days ago, 2X has taken up the sprained ankle case, but no television cameras or newspaper reporters showed up. It’s a small misfortune. For now, he’ll take what he can get.