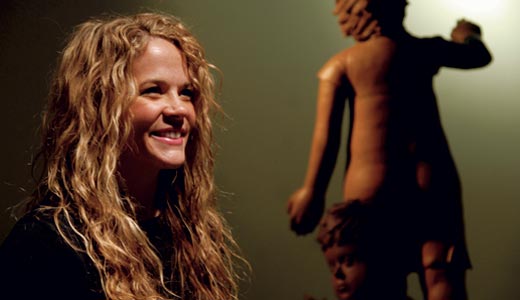 Andréa Keys’s kids make me uncomfortable. Enormous and fat, towering on platforms, being absorbed into walls, pointing vacantly into the horizon beyond the Kentucky Museum of Art and Craft, they are super-sized bruisers with heavy hands, necks and ankles. Absent is the cliché of cuteness that plagues art about children. They are like pensive, distracted Big Boy statues in monochrome.

One little boy lies facedown, sinking into the floor, pointing aimlessly to the middle distance. Across the gallery, an alabaster girl kneels to feed a crowd of ferrets that surround her — a subtle blush moving up her body from the hand she extends to one poised on its hind legs. A pair of thunder thighs leaps out of the floor as if someone dove into the floorboards; a girl is half absorbed by the wall she leans against. As you walk through this constellation of larger-than-life children, you sense a conversation being conducted silently among them — a palatable tension, like the kind you feel when you stand amid a group in an elevator.

I know people who don’t watch foreign films because they hate reading subtitles. Not surprisingly, there are those who breeze by the artist’s statement in galleries, convinced that the artist’s intention will become clear to them without the intercession of explicit language. I’ll admit I’m the latter. Without having read hers, I would have been of the opinion that Keys’s sculptures depict the nervous ambiguity of both childhood and adulthood at the dawn of the 21st century.

Sounds a little highfalutin, you may say. But consider the American experience of the last decade: a new era of global awareness ushered in by a terrorist attack and the expansion of the Internet; a “war on terror” under the pretense of eradication of non-existent weapons of mass destruction; a baffling mortgage crisis followed by an open-ended recession; natural disasters like Hurricane Katrina; and the recognition of the threat of global climate change unsurprisingly leave many adults feeling like enormous children, innocent prey to forces beyond their control, susceptible to their environments, yet powerful enough to make choices, the consequences of which are as inevitable as they are incalculable. Our perceptions of childhood in the new century have undergone changes as well — consider how the word “tween” has entered into our collective vocabulary, and with it, recognition of the burgeoning power and personhood of the older child.

After touring the gallery and reading Keys’s statement, I could see how her sculptures are “driven by a desire to investigate how an individual’s personal history affects their identity, behaviors and actions … how intergenerational trauma and a person’s past, particularly a past that has been interrupted by a traumatic event such as war, can influence patterned and learned behaviors that are passed through the family.” Her half-children — sinking, disappearing, lying prone around the gallery — are missing parts of themselves.

Relatable, eloquent and curious, Keys’s sculptures capture an important reality of our zeitgeist.