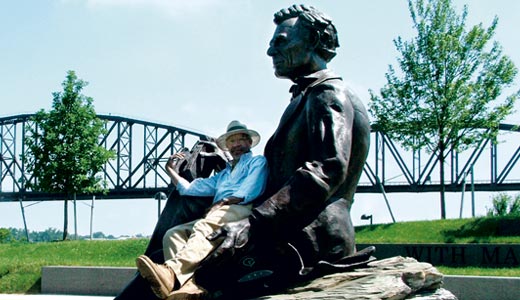 We know how Abraham Lincoln began (born in a log cabin) and how he ended. Sculptor Ed Hamilton has given us the middle.

Not an image of the mythical Lincoln, but of the man. This is Lincoln long before the presidency, Civil War and Emancipation Proclamation.

That’s a difficult assignment, as Lincoln’s time in Kentucky was brief. He was born near Hodgenville in 1809, and lived there only until he was 7 years old. He resided in Louisville for three weeks in 1841, staying at Farmington, the family farm of his friend Joshua Speed. His next time in Kentucky was when he visited his wife’s family in Lexington in 1847.

Yet his ties to Kentucky were strong, leading Lincoln to famously say, “I, too, am a Kentuckian.”

Hamilton’s solution, assisted by his associates — sculptors Forest Boone and Juliet Ehrlich, and landscape architect Glen Allen — is a sculpture set among four “storyboard” plaques and an amphitheater. They’re placed among small, undulating hills facing the Ohio River between the Big Four and Kennedy bridges.

While this pays homage to Kentucky’s Lincoln, it is placed, obviously, in Louisville. That puts the time period in the middle of his life.

Lincoln was 32 years old when he arrived in Louisville to visit the Speed family. He said it was one of the happiest times in his life.

It’s not hard to imagine a younger, beardless Lincoln from this time, out for a walk along the Ohio River, books in hand. An avid reader and gregarious storyteller, all he needed was a large rock on which to rest and engage with fellow strollers.

“Well, I didn’t want to do traditional Abraham Lincoln; most we see are post-presidential,” Hamilton says. “I wanted him down-to-earth, literally, one with the people, inviting. He loved telling stories and jokes.”

The lanky 12-foot-tall Lincoln sits on a rock carved by Boone, with a law book in his hand, and Shakespeare and the Bible by his hat. “I envision children climbing on it, sitting in his lap, sitting on his top hat,” Hamilton says. “Casual setting, sitting on a rock.”

“The sculpture of the rock provides context,” Boone explains. “Sitting on a dirty rock, by a muddy river. It has a good sense of place.” He sculpted the clay on the waterfront, wanting it to look like sedimentary rock native to Kentucky. “If moss grows on it, that’s a bonus,” he says.

Boone had a personal experience that all involved in the memorial want to happen many times over. He was working on site when he saw a large group of children. “Kids on foot, at least a school bus full of kids. They came over to me and asked about the sculpture. I told them how it was made. They just oohed and ahhed. If the lap and hand become shiny [from use], that’s [Ed’s] greatest compliment.”

While Lincoln’s visit to Louisville was largely a time of joy, it also marked the beginning of a profound shift in his thinking. He saw slaves being herded onto boats on the Ohio River. That pivotal moment set the stage for his belief against slavery. He later wrote to his friend Speed, “… that sight was a continual torment to me …”

That revelation is reflected in one of the four plaques that further illustrate Lincoln’s relationship with Kentucky. Others show his childhood, relatives and friends, and how the Civil War divided those he loved.

That’s a Hamilton specialty. What is admirable about his work is the humanity he gives to all his sculptures, a potent mix of history and spirituality that brings life to metal.

The dedication was held on Thursday, June 4. Luckily, the weather cooperated, complete with a red sunset over the river.

“I can’t wait to get on the Belle of Louisville to see it,” Hamilton says. “I like this. I’m grateful every morning that I get up to create. And if I don’t get up, at least I can lay there and think about it.”

“I, too, am a Kentuckian” — The Kentucky Historical Society has grouped objects and text that reinforce Lincoln’s ties to Kentucky. The state was obviously more to him that just his birthplace, especially during the Civil War.

This exhibition takes us behind the scenes of the making of the Lincoln memorial in Waterfront Park. It’s a look inside the creative mind of sculptor Ed Hamilton through his step-by-step process. Included are early clay sculptures, a 12-foot foam model and a 15-inch plaster model, as well as preliminary sketches of the bas-relief panels.

Sunday, July 12, 2 p.m.: Bryan Bush lecture and book signing of “Lincoln and the Speeds: A Tale of Enduring Friendship”