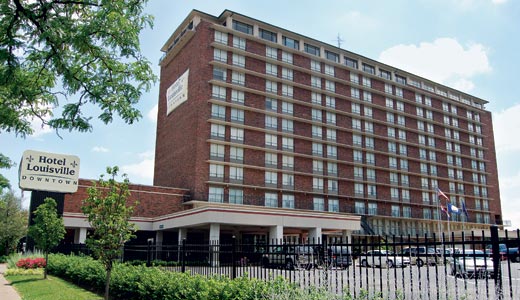 It seemed like a done deal, at least for about a day: The Hotel Louisville on West Broadway had fallen into foreclosure, and Wayside Christian Mission successfully bid on the property at auction, planning to turn the 287-room building into a shelter for homeless women and children.

Having learned from previous snafus, Wayside officials contacted nearby businesses to explain their plans before submitting a bid and encountered zero opposition. The support (or perhaps apathy) was a pleasant surprise given past community resistance — first when the nonprofit attempted to renovate its East Market Street facility, and then upon trying to open a shelter for families at the former Mercy Academy campus in the Original Highlands.

In the end, neither of those endeavors worked out for Wayside.

But just as it appeared Wayside’s luck was changing, it became clear the nonprofit would face yet another obstacle:

It turns out Jefferson Community and Technical College wants the land at Second and Broadway to expand its downtown campus. Unfortunately for JCTC, the state legislature failed to approve a measure during its last session that would have granted the college permission to spend up to $10 million to buy the 2.9-acre plot of urban real estate.

“It’s a strategy of last resort, but it is a strategy,” Shaugnessy tells LEO Weekly, reiterating that he fully supports Wayside Christian Mission. “I am not one of these people standing up and saying this isn’t the place for a homeless shelter. My argument is that the best use of the property is for the college.”

(A quick lesson: The U.S. Constitution allows government entities to use eminent domain — also called condemnation — to take private property for “public use,” in exchange for “just compensation.” Although one might argue a homeless shelter is just as much a public use as a community college, when it comes to eminent domain, there’s a tremendous amount of gray area that tends to benefit the government.)

“I hope it will not come to condemnation, but if that’s the only option, then I certainly support that,” says Shaughnessy, acknowledging that the state legislature is to blame for failing to grant the Kentucky Community and Technical College System the authority to buy the property for JCTC in advance of the foreclosure auction.

The senator plans to ask Gov. Steve Beshear to place the matter on the agenda during the upcoming special session, which begins June 15. Assuming lawmakers give the OK this time around, officials with the state community college system will approach Wayside about selling.

“If we are granted authority to acquire the property, then we will work with Wayside to see if they’re interested in selling,” says Ken Walker, vice president of KCTCS.

If the nonprofit is unwilling to negotiate, pursuing the property through eminent domain is a likely next step: “I would think that at this point we are prepared to use whatever legal options we have available to us,” Walker says.

So what does Wayside think about all this?

“This property is so important to the homeless families and women in Louisville. There is no room in homeless family shelters anywhere in this town and the waiting list is just enormous,” says Nina Moseley, chief operating officer of Wayside, which shelled out $10 million for the hotel because “that’s what we felt we needed to bid” to secure the site.

That being said, she has no interest in selling the West Broadway property, although that decision is not solely up to her. However, Moseley says Wayside is willing to discuss the prospect of sharing the land with JCTC: “We need the building; they need the parking. We would be willing to negotiate a possible sharing of the property so they can use most of that expansive parking area to build a parking garage in the back.”

As for that “strategy of last resort” being discussed: “We don’t feel that eminent domain is the right thing to do.”