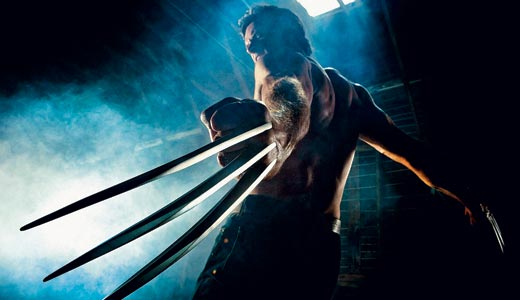 If you’re looking for a slicing, dicing, exploding thrill ride where you can get a glance at Hugh Jackman’s butt as it tumbles down a waterfall, “Wolverine” is the movie for you.

If you need more information before making a decision, read on.

Technically, I believe this film is called “X-Men Origins: Wolverine,” but let’s try to leave that goofiness aside. Like its mutant-infested cinematic predecessors, “Wolverine” takes characters and situations that have their origin in brightly colored ink and tries to bring them down to earth just enough to work on film with actual human beings. These days, there are a few different options in making a super-movie. Both “Sin City” and “300” placed actors in ultra-stylized CG environments to approximate the feel of the comics. “The Dark Knight” put our hero in such a convincingly gritty world that we forgot all about the candy-colored versions of him we’d seen before. The most conventionally successful superhero movies, like “Spider-Man” and “Iron Man,” tend to smooth together the effects-laden razzle-dazzle with enough moments of humor and pathos to keep viewers caring about the people flying around in funny outfits.

“Wolverine” basically follows this last model but is able to take a couple steps in a dark and gritty direction by being what they call — in the comic book world — an origin story (see: goofy title). Thus we get Hugh Jackman as Logan, pre-X-Men, pre-funny-outfit; even pre-adamantium-laced skeleton for a while. Don’t worry if you don’t know what that last bit means. It’s all explained in the movie. Not that everything is. I’m pretty sure it’s never made clear why Logan doesn’t seem to age much, thus allowing him to take part in every American conflict from the Civil War onward during the credit sequence. We can assume it’s a part of his mutant-ness.

It’s pretty fun to get answers to the mysteries of Logan’s youth and days as a top secret government mercenary, but if you read a lot of X-Men comics in the ’70s or ’80s, you may be attached to a slightly different version of Wolverine than the one depicted here. I did, and I am. My Wolverine was a short, hairy guy in a foul mood, hiding his pain by cracking wise and flying into a near-psychotic rage at least once an issue. His memories had been erased under mysterious circumstances, so we never knew much else about our favorite X-Man, and that was cool.

As much as he growls and flexes and chomps on cigars, Jackman’s Wolverine is just a bit more refined than his funnybook version, and the PG-13 rating probably keeps the movie from living up to some of the cathartically wild violence of Wolverine’s adventures on paper. Don’t tell the parents, but you can get away with a lot more when the blood is printed in red ink instead of splattered hyper-realistically across the screen with movie magic.

Don’t ask me why.