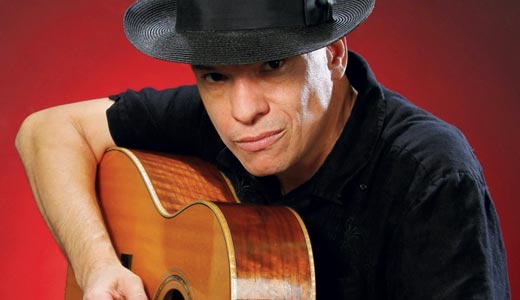 A phrase frequently echoed throughout Wayne Hancock’s career is “the real deal.” Hank III, Joe Ely and Bobby Koeffer of the Texas Playboys have all said it, referring to Hancock’s signature blend of western swing, honky-tonk, blues and big band — a thing he calls “juke joint swing.”

Since his rambunctious 1995 debut Thunderstorms and Neon Signs, Hancock has been a chronic outsider among fellow country crooners in his uncompromising quest to realize his vision. While his music is steeped in tradition, it is not a shtick. It is barn-burning, roof-raising American music at its best. “I’m like a stab wound in the fabric of country music in Nashville,” he says. “See the bloodstain slowly spreading? That’s me.”

But because of the endless comparisons with pioneers of country music, Hancock is often labeled a “throwback,” denying the unique hybrid the singer/songwriter has created. He is a modern singer who sings about modern problems, including the recession. “Poor folks,” he says, “call it a depression.”

At 200 tour dates a year and 15 years on the road, Hancock is perhaps one of the hardest working musicians in alternative country, rightfully earning his nickname “The Train.”

“We work our asses off,” he laughs. “We play two to three hours a night. Most bands nowadays only do an hour.”

The recent release, Viper of Melody, is Hancock’s seventh studio album. A viper is jazz slang for someone who smokes reefer. “I get high off music, so I guess I’m the ‘viper of melody,’” he says.

Unlike Hancock’s previous releases, Viper was done with his touring band, which includes Izzy Zaldman (lead guitar), Huck Johnson (upright bass) and Tony Locke (steel guitar). “Usually I record with friends in Austin,” he says. “I’ve been with these guys for
about a year and thought it was time for a change.”

It was a wise decision to record with his traveling Juke Joint Revival. The sheer energy that emanates from the record is uncanny. At times it feels live, and they do it all without a drummer. Johnson’s unrelenting bass provides more than ample backbeat, allowing the rest of the band to shine. James Burton-style guitar blends brilliantly with pedal steel.

Produced by longtime collaborator Lloyd Maines (Wilco, The Dixie Chicks, Uncle Tupelo), Viper piles on chicken pickin’ telecaster solos and stand-up bass breakdowns. Even when he sings about the working poor and hard times, Hancock’s most socially relevant album is anything but a throwback.