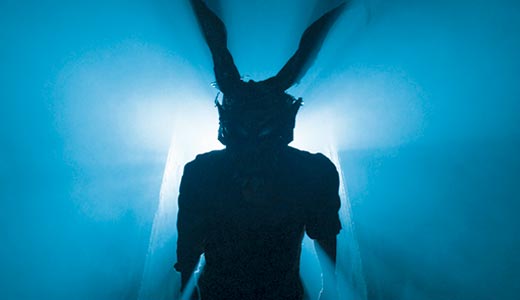 “Donnie Darko” remains one of the most enigmatic and talked-about movies of modern times, with Jake Gyllenhaal playing a teen, slowly losing his sanity due to a tear in the fabric of time — though he doesn’t know that. The studio put out several versions, the latter ones with lame “robot vision” and a more explanatory plotline, but the original remains a flawed gem. So now they offer this sort-of sequel with Donnie’s little sister (Daveigh Chase) on the run from her shattered home (really, a jet engine fell on it) when a meteorite rends time again, leading to the end of the world. Or does it? Watchable, but rabid fans of the original should probably avoid it.

UNDERWORLD 3: RISE OF THE LYCANS

The producers, having milked this repetitive franchise dry after the first two, dreamed up a prequel in order to explain star Kate Beckinsale’s absence (she shows up in a 20-second retread clip from UW2 at the end). Otherwise, it’s more of the same with Michael Sheen and Bill Nighy (Davy Jones from the “Pirates of the Caribbean” movies) returning to fight a never-ending war. We’re suckers for these sorta CGI snarl-fests — hell, most anything with a monster — but even we thought this was strictly for-the-bucks.

In 21st century Japan, a family of friendly vampires settles into suburbia, secretly and peacefully (usually) harvesting blood from the unsuspecting neighbors. Except for high-school-aged Karin. She doesn’t drink blood — her body makes too much of it! A fun, allegorical look at growing up for girls.

A breathtaking HD look at the life of the American bald eagle. The aerial shots in this wildlife doc are some of the best we’ve ever seen. Also includes “The Wolf That Changed America” — a dramatization of the true story of Ernest Thompson Seton, whose encounter with a “killer” wolf in 1893 lead to the creation of both the National Park system and the Boy Scouts. Good stuff.

As far as we’re concerned, Anne Hathaway can do no wrong on the screen; it’s always good. Here she leads an all-star cast including Patrick Wilson, Andre Braugher, Clea DuVall and Dianne Wiest, as a trauma counselor who finds disturbing differences in the stories of survivors of an airplane crash. It gets pretty hokey by the time they start to vanish, one by one, but it’s still fun.

Simply the best damned indie horror film of recent years. A wonderful mishmash of mutation, madness, childhood innocence, shocking secrets, sharp little fingernails, great writing, believable characters and a well-paced sense of “ewwww, ick!” that builds unannounced. This is a horror film made the way that horror films should be made — not just an excuse for mindless bloodletting and torture-porn. We liked it.

If you are a fan of “Family Guy” or “American Dad,” then you already know about this skewed, animated look at pop culture from the master of the genre. Raunchy, twisted and over the top at times, we enjoyed each filthy flicker, though they are admittedly inconsistent. A scattershot, hit-or-miss bag o’ fun for those not easily offended.

With the new “Star Trek” movie now well ensconced in theaters, Paramount opens its vaults to reveal all six original Kirk/Spock movies on Blu-Ray in a perfect boxed set along with two-and-a-half hours of all-new bonus material. What more could you want to know? Should be available for under 80 bucks at the discount stores.

Liam Neeson — who kicked ass as the original “Darkman” — returns to prove he can still kick ass in this you-kidnapped-my-daughter-so-I’m-going-to-hunt-you-down-like-a-dog actioner. The daughter, Kim, played by the stunning Maggie Grace, is to be sold on the white-slave market unless former-spy Neeson can save the day. Simply terrific.

Kevin Bacon is pretty much a one-man show in this HBO offering based on the true experiences of a volunteer military escort officer, here taking the body of a 19-year-old Marine back home for burial. It’s a fairly obvious drama, but Bacon makes it worth watching.

Local-born actor Joshua Dallas (“The Descent 2,” “Doctor Who: Silence in the Library”) stars in this brutal pugilist tome. Costars Stacy Keach at his slimy best, and Limey babe Kelly Adams as an odd choice for the woman whose love drives him to prevail.

A Criterion Collection HD release of John Huston’s legendary ode to America in all its blustering eccentricity. Ex-soldier Brad Dourif, seeking a life free of hypocrisy, opens the first Church of Truth Without Christ in a little Southern town. Harry Dean Stanton, local-boy Ned Beatty and director Huston teach him that, in the United States, you are free to say and think and pray any damned way you like. Yeah, right. One of America’s unheralded great movies. Our highest recommendation.

TWO AND A HALF MEN: THE COMPLETE FIFTH SEASON