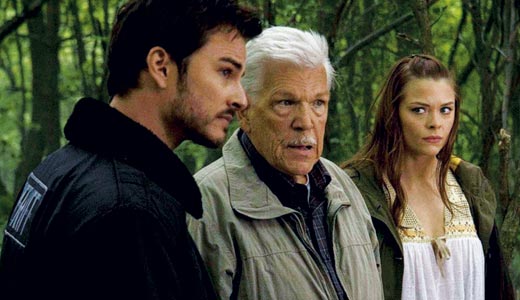 3-D remake of the 1981 slasher classic about the seeming resurrection of an insane miner who murders people with a pickax. Jensen Ackles of “Supernatural” stars as the prodigal son who returns to town just in time to be blamed for the murders, with Jaime “Hubba” King as his old flame and Betsy “Damn!” Rue as some nice 3-D camel toe. Rumor has it that Rue is going to be in the proposed “Black Friday 3-D” of 2010.

Tom Cruise, Kenneth Branagh, Bill Nighy (Davey Jones from “Pirates of the Caribbean”), Tom Wilkinson, professional cross-dresser Eddie Izzard and Terence Stamp are among the luminaries populating this dramatization of the true attempted assassination of Hitler by his most-trusted High Commanders. While it stars Cruise, the real talent here is director Bryan Singer (TV’s “House,” the first two “X-Men” movies) who keeps the tension building to a heart-stopping pitch. One rock-solid flick.

As you read this, we are lying drunk on the nude beach of Sanibel Island and a pair of hot young babes are rubbing suntan lotion on each other and feeding us shrimp without using their hands. If we see Barney, he’s a dead mofo.

DIRECT YOUR OWN DAMN MOVIE!

Lloyd “Troma” Kaufman’s update on his seminal 2005 “Make Your Own Damned Movie!,” now a four-disc set wherein he shows you the best tricks and techniques from his 40-year career in no-budget cinema. Of course, the best parts are the behind-the-scenes shtick, factoids and interviews with the likes of Stan Lee, Trey Parker, Matt Stone, Dario Argento, Eli Roth, Stuart Gordon, Joe Dante, the legendary Herschell Gordon Lewis and others. A steal at this price.

GODS OF FOOTBALL: THE MAKING OF THE 2009 CALENDAR

A breathless, gay, behind-the-scenes look at the annual fundraising nudie-calendar featuring the Australian Rules and Rugby League Footballers. After the fools we made of ourselves over the last “Making of the Sports Illustrated Swimsuit Issue” DVD, there’s not much we can say here …

A quintet of queer films from the distaff side: “Carmelita Tropicana,” “Jumping the Gun,” “Lavender Limelight,” “Little Women in Transit” and “Playing the Part.” Our favorite was “Little Women,” about a 12-year-old girl wearing her first bra, wedged between her two obnoxious sisters in the back seat of the family car.

OK, so it is stupid. We still drool over this Blu-Ray version of “Terminator 2: Skynet Edition” — plus both the Extreme and Ultimate Editions — and its packaging: a 14-inch tall chromed Terminator Endoskull with flashing lights and neat-o sound effects from the movie. Sue us, we’re geeks.

Wow! What a neat movie! A normal teenage girl in a small, isolated town in the Pacific Northwest discovers that she carries the town shame: a bizarre virus that will force her into hiding, lest the rest of the town kill her once she starts to hideously deform. A clever and effective allegory for coming-of-age with a truly demented twist. Worth your time.

Hard to believe that this was the first film of 2009 to gross over $100M, but it’s true. Guess that timing really is everything, because otherwise this is just an overlong TV sitcom. Not that we didn’t enjoy it, mind you, it simply won’t be remembered among the great comedies of history. Security guy Kevin James assists the police by staying inside when armed gunmen take over his beloved mall.

The first completely uncut, fully restored American version of Joe Spinell’s (“Rocky,” “The Godfather,” “Maniac”) most disturbing and provocative work. Joe plays a lonely cabbie who dreams of becoming a famous movie director. His fantasies about hiring big star Caroline Munro for his imaginary film leads him to stalk her, making him a prime suspect when people begin dying at the Cannes Film Festival. With bonus materials from Troma’s Lloyd Kaufman.

THE TOWN THAT WAS

Believe it or not, we’ve been following this story since the late ’60s when a trash fire set a coal-seam blazing beneath a little town in Pennsylvania. Now, almost 50 years later, the fire continues to burn, having run out all of the people except 11 idiots who spend their days and nights surrounded by sulfurous smoke, white-hot jets of gas and a constant rain of hot ash. With no way to put the fire out, the ever-growing devastation is mesmerizing.

Anna Paquin and Stephen Moyer play star-crossed lovers — one of which is an immortal vampire — amid the sweat and mosquitoes of the dank Louisiana piney-woods. The cable-TV MA rating lets them get a bit bloodier and racier than the usual TV vamps — which is a very, very good thing, providing the grisly titillation this topic has so sorely lacked over the years.

Fans of Chazz Palminteri will enjoy this ode to old-time gamblers; an intelligent, lively and heartfelt tale about a dice hustler trying for one more big score. With Christine Lahti and Tom Guiry as the estranged son who shows up at just the wrong time.

WORLD OF WONDER: SEASON ONE