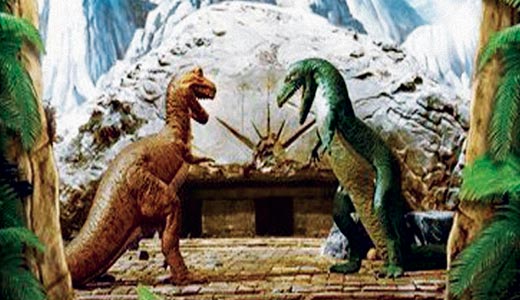 Land of the Lost

A long-overdue biodoc on the angriest, most talented, foul-mouthed asshole ever to grace a printed page. While arguably wasting his gifts on such dreck as “Babylon 5” and latter-day “Twilight Zones,” Harlan Ellison truly believes in the power of sci-fi to save us from our baser instincts. And he’s done it all — more than 75 books and 1,700 articles — on one old Olympia manual typewriter. A man whose moods can swing from brilliant observations on the human condition to an obscene tirade about editors (he once mailed a dead gopher to his publisher) — this is a guy you should get to know. Highly recommended.

LAND OF THE LOST: THE COMPLETE SERIES

Just in time for the big-budget Will Ferrell remake coming out in June (yeah, THAT’S gonna be good …), Universal has finally dropped the price on this ’70s guilty pleasure — and you can now get it packed in a limited-edition LOTL lunchbox! Anyone who needs a review of this Saturday morning staple should just start singing: Marshall, Will and Holly, On a routine expedition, met the greatest earthquake ever known … The rest’ll come to ya.

A THOUSAND YEARS OF GOOD PRAYERS

A mesmerizing look at old-world cultures boiling away in the melting pot of America. A Chinese man comes to our shores to help his adult daughter, but, when he arrives, he realizes she is no longer Chinese. This leaves him without the structure of tradition to guide him in his task. Art-housy but good.

Olivier Gruner — not known for making high-concept movies — and Michael Berryman star in this exciting, epic and historically accurate WWII tale of heroism, duty and brotherhood. Russian, Polish, German and British soldiers clash as enemies but find common ground in Freemasonry, which has been instrumental in guiding the Western political landscape for more than 200 years. Worth checking out.

It’s hard to grasp, but overstuffed Delta Burke, Southern-steeled Dixie Carter, Annie “Ghostbuster” Potts and big, softhearted Jean Smart put on one helluva good show for five seasons beginning in 1986. (Then Burke and Smart bailed, and the show limped along for another two years.) Together they ran Sugarbaker’s, an interior-design firm that never got in the way of the plot. Snappy writing, plenty of sass and Burke’s cluelessly cruel one-liners made this one of TV’s best.

If this French doc doesn’t scare the holy shit out of you, then you need to eat more fiber. Candid conversations with the leaders of 12 of the world’s largest companies revealed — in cold-blooded frankness — their plans to rule the world as a corporate plutocracy by the mid ’90s. When it was first completed, several of them realized their mistake and requested that the French government not allow it to be shown on TV. The government obeyed — and as far as we can tell, this is its first ever American release. A bone-chilling look at the true rulers of the world around you.

OK, follow closely: A mega-star rapper is not really a rapper, he’s a cartoonist who has been set up by a record label to pretend to be a hate-spewing street-rhymer. Why? So they can turn one of his friends into an enemy-rapper and start a rap-war to boost sales. We think. Anyone who figures this thing out can have our jobs.

By the ’70s, Saturday morning cartoons had all moved production to third-world countries, making them cheap, shoddy affairs. But this collection of 14 episodes from the ’60s are still vibrant and alive. Includes Top Cat, Porky Pig, Quick Draw McGraw, Secret Squirrel, The Jetsons and more.

We LOVED this fun History channel re-enactment doc on one of the strangest and least-known events in American history. Eleven years after Lincoln’s shocking death, a band of Chicago criminals (or is that redundant?) decided to dig him up and hold him for $200,000 ransom. It was the newly formed Secret Service that ingeniously foiled the plot. Great stuff.

THE CLOSER: THE COMPLETE FOURTH SEASON

Kyra Sedgwick is still smokin’ as the LAPD’s most aggressive homicide detective in this ambitious and entertaining series for TNT. And watch for G.W. Bailey as “Lt. Provenza”; he was a member of Actors Theatre here during the ’70s.

THE REAL JOAN OF ARC

Common history has it that Joan of Arc — a teenage shepherdess who saved France from the English — was burned at the stake for her troubles in the city of Rouen. This doc looks at an alternate theory: that she allowed another girl to be martyred in her place, resurfacing later under another name.

DIRECT FROM THE MOON