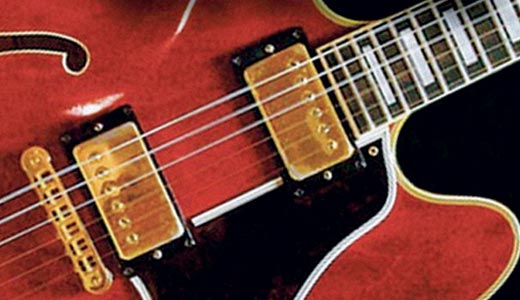 If you are a hopeless guitar-hack like our own Rowdy Bill Raker, you’ll love this latest picker’s-guide-for-the-hopeless from the guys at Mel Bay Inc. Old Chuck was one of the sloppiest players around, so his signature sound — imitating the piano riffs of bluesman Johnnie Johnson — is easy to master with only a little practice and a lot of beer. Hail! Hail! Rock ’n’ roll!

A damn entertaining little comedy about the lives of would-be rockers who decide to move out of their parents’ basements for one final make-or-break stab at the big time. But when their bass player’s penis explodes on stage (we won’t spoil it), they hire crazy/hot Lara Wickes as his replacement. We loved it.

A SONG OF INNOCENCE

French arthouser set in the late 1800s about a wealthy man who hires a live-in wet nurse to assist his wife. But the bond between the two women becomes so affectionate that he feels betrayed and alienated within his own family, leading him to act like a big jerk. Quite good.

Daniel Craig, Liev Schreiber, Jamie Bell and Alexa Davalos (the hottie from “The Mist”) tell the true story of Jewish brothers who rescue a thousand others and hide from the Nazis in the Belarusian forests, eventually creating a hidden village. But should they continue to hide, or should they return to fight for their freedom?

Dolph Lundgren returns with long-necked Gina Marie May and Michael Pare. That probably tells you all you need to know.

A special 25th Anniversary Edition re-release of the video that launched the home-video revolution! Taped live in 1983, 22-year-old Murphy’s expletive-filled standup routine was blasted by media groups as obscene, sorely testing the independence of the burgeoning cable-TV industry. This publicity made it a massive hit on that newly invented technology called VHS. Check it out; it’s still funny as hell!

HE’S JUST NOT THAT INTO YOU

Ben Affleck, Jennifer Aniston, Drew Barrymore, Jennifer Connelly and a bunch of other good-looking, overpaid people star in this comic look at modern dating that lasted about 45 minutes at the theaters. A good date flick, but could have been sooo much better with an R-rating.

LAST DAYS OF THE FILLMORE

For those of the current generation: Rock God Bill Graham’s crowning achievement was San Francisco’s Fillmores East and West: rock palaces that launched the careers of everyone from the Grateful Dead to Santana. This doc — long out of print — focuses on the era, the crowd, the music and the performers at Fillmore West’s legendary Last Show of July 4, 1971. “But the man there said the music wouldn’t plaaaaay.” We cried.

A well-priced addition to the library of any anime fan. “Mazinkaiser” (1971), a Mecha sequel to the groundbreaking Mazinger Z tales, was the inspiration for a whole wave of “Mobile Suit Gundam” craziness that lasted well into the ’80s. That’s about the time that “Shuten Doji” (aka “The Star Hand Kid”) surfaced, focusing on Jiro Shutendo, a 15-year-old trying to survive high school and warring Oni (demons) who want his secret powers.

PAUL SIMON AND FRIENDS: THE LIBRARY OF CONGRESS GERSHWIN PRIZE FOR POPULAR SONG

A truly stupid SciFi Channel CGI crapfest about a toothy giant eel in the Florida Everglades … that can somehow squeak through a shower drain! The hot sheriff, Kathleen LaGue, is worth checking out.

Leo DiCaprio and Kate Winslet are living the good life of 1950s suburbia. But they aren’t satisfied and begin to explore ways to renew their passion for life with increasingly disturbing results. Good adult period drama, if kind of a downer.

The inevitable Blu-Ray release of our all-time favorite Bad Movie. How to describe it? Well, Mike Nelson of MST3K called it: “The gold standard of bad movies; the movie that is used to judge just how BAD a movie can be, as in, ‘OK, it’s repulsive, sophomoric and stupid … but is it worse than ‘Roadhouse’? The answer being, ‘No, of course it’s not — how could it be?’” Patrick Swayze’s follow-up to “Dirty Dancing” wherein a former Catskills ballroom dancer with a PhD works as a bouncer in a Texas roughhouse. A must-own.

You’ve seen “Snakes on a Plane,” right? Imagine “Snakes on a Submarine”! Not enough? OK, put legendary shlockmeister Fred Olen Ray at the helm and add Tom Berenger, Luke Perry and hot and nasty Krista Allen. Still nothing? Well, what if the snakes are MUTATING!? Now you get it: Big Dumb Fun in a can.

SNL vets Amy Poehler, Rachel Dratch and Will Arnett are the big names, but this movie belongs to Parker Posey, Jane Lynch, Amber Tamblyn and Missi Pyle. A cadre of “mature” women decide to vacation together at an island populated by beer-addled college kids … some of whom, like the women, are having trouble coming out of their shells.

A terrific doc on the events, legends and era when Smokin’ Joe Frazier took on Muhammad Ali for the third and final time in 1975. What makes this stand out, though, is its focus on Frazier. Once Ali’s closest friend, a man who stood by him when stripped of his boxing title, here he stands alone, feeling used and betrayed while Ali runs out of control. Highly recommended.

OTHER DVDS OF INTEREST

INNING BY INNING: A PORTRAIT OF A COACH