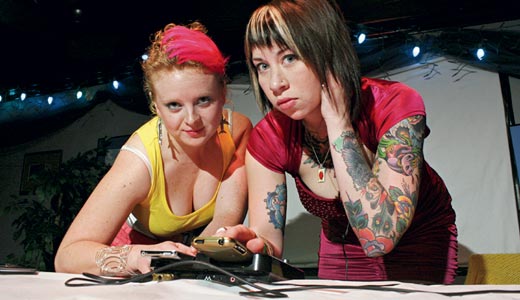 DJ Lady J takes center stage at her own dance party, kicking up her high heels and shaking what her mama gave her. Pumping her fist to the beat, her curly red hair bouncing along in rhythm, she seems to be setting some kind of new standard for what a “good time” really means.

The star of the dance floor anticipates the end of the song. She rushes around the large table holding a small, modern contraption and joins her counterpart, DJ Ninja, to choose the next song. Using only iPods and a mixer, the do-it-yourself DJs are, to put it academically, achieving the goal of a longstanding tradition: playing music that makes people dance.

“Music is a passion of ours, and we like to share it with other people,” Jessica Hudson, as she’s known in the nine-to-five world, says.

Just a few months ago, Hudson and Natasha Speth were on the dance floor watching two women DJing and decided they could do it, too. They realized they dug the same music. “Two days later we went and bought an iPod mixer, messed around with it for a few minutes and we were like, Yeah!” Speth says.

Sticking to what they know, they have foregone the complexities of standard mixers and turntables, an increasing trend in club music, with the popularity of iPods, laptops and other devices that have made almost any kind of music shareable. Although they hope to learn the more traditional way of DJing — turntables and vinyl — they say their simple equipment and DIY style make them more approachable. “If we don’t have what you want to hear, bring your iPod and we’ll play it,” Hudson says. “As long as it makes people want to dance.”

Defining a DJ can be tricky. Playing music people like and getting them moving may seem to be the ultimate goal, but the execution is decidedly more technical. Most DJs consider themselves musicians, although traditionalists may argue that ad infinitum.

“They reconstruct it as not just playing others’ music, but using recorded sound to create new music,” says Dr. Diane Pecknold, a professor of Women’s and Gender Studies at the University of Louisville. In her course “Gender and Music,” Pecknold explores gender roles and the authenticity afforded by technical skill and performance expectations often used to define quality in music.

Speth and Hudson are part of an increasingly large and musically diverse population of female DJs who have gained significant notice in Louisville over the last few years. And while this is not a cohesive movement, the simple fact that women are crashing what has long been a boys’ club — with much success — suggests a cultural shift toward a more open, diverse nightlife scene.

In other words, shaking your ass is no longer a two-step.

Since the halcyon days of DJs, from sock hops to Madonna’s “Hey Mister DJ,” men have been the ones behind the booth — at least that’s been the perception. According to Pecknold, women are considered anomalies in the profession.

“Since the position of the DJ brings together the roles of instrumentalist, sound engineer and music critic, it carries the gendered connotations those roles have traditionally held,” she says.

Without a venue for formal instruction or the kind of network of female DJs that other cities boast, the women breaking onto the scene here are finding their way through mentors or basic trial and error.

DJ Kim Sorise has been part of the city’s music scene for nearly a decade. A self-diagnosed vinyl junkie, Sorise plays mostly soul and funk at “Wax on Wednesdays,” her weekly gig at The Patron on Frankfort Avenue. A former radio DJ who is now a teacher, Sorise says music has been an essential part of her world since her first concert, when she was 3.

She’s also resident DJ for the Derby City Roller Girls. Being a woman was part of the job description.

“They came to me and said they wanted a female DJ. It sets the dynamic with the music I play. It would be different if a guy were playing all this rock about hot girls, but me doing it makes it part of the game, not separate from it,” she says.

Sorise spins at both the matches and the often-raucous after-parties. She has a penchant for the underground; often, Sorise shows are as much musical education as dance party — for those willing to pay attention.

She says her upbringing gave her a foundation to thrive in a historically male-dominated field.

“The women in my family were all strong-minded, self-made women,” she says. “I didn’t know how to be any other way.”

Female DJs transgress gender norms in part because of the position of power it offers. The DJ’s basic duty is to provoke a sensual response from an audience. Women’s physical and sexual control over others’ bodies, and most often their own, can be seen as threatening.

“Anytime I’ve ever had a boyfriend or male friend with me, people come up to him and ask about business or even the songs,” Karen Simon, aka DJ Karen Marie, says of the gender disparity she has seen in her decade of spinning.

Inspired by a female DJ she saw at her first rave, when she was 15 years old, Simon balances her music with school and motherhood.

“People think I’m selfish for spending any time spinning records, even at home, but especially going out,” she says. “No one would ever say that to a guy who has kids.”

But Simon says it’s important for her to do what she loves, because that helps create a strong role model for her daughters.

Spinning breaks and hip-hop, she was attracted by warehouse parties when she first moved here from Salt Lake City, Utah. “I only got asked to do Pajama Parties,” she says. “They always seemed disappointed when I showed up in flannel instead of lingerie. That was the only time I saw a lot of female DJs, not at the hip-hop parties.”

DJ Choice has had a different experience.

Touting herself “Queen of the Ville,” one of the most prominent female hip-hop DJs in Louisville — real name: Taiesha Washington — says she has been welcomed into the scene.

“They are always excited when I tell them I DJ. They just think it’s something different, they never question it,” she says of the promoters and industry people she works with. Having well-known DJ E-Feezy — of B-96FM — as a mentor has helped. But using her gender as a promo card has also afforded her some notoriety. Getting shout-outs from prominent rapper MC Lyte and producer Ron Browz, Washington is making a name for herself.

Although she says “dressing hotter will get you more gigs,” Washington says she’s never had people question her ability because she’s a woman. But establishing a greater female presence in hip-hop is important to her. She’s recruited other female DJs and promoters for her company, Lime Light Productions, and she’s working on a mixtape featuring music exclusively by female artists, producers and DJs — the first of its kind in hip-hop, she says.

“We are here, recognize us and respect us, because we can do it, too,” she says.

A common thread among many of the city’s DJs, along with making people groove, is exposing audiences to something new. That’s how the Lady Killers, whose approach is more technologically current than Sorise’s, came to be.

While DJ Jackie O was perusing Carol Hamilton’s iTunes, they noted some common interests. Although Jackie O — who doesn’t use a last name — has been a club promoter for two years, the transition to DJing was tough.

“Choosing to be partners was definitely an intentional decision. Having someone to learn with and back me up helped me build the confidence to do it,” she says. Jackie O has a lot of male friends who are DJs, and that proximity helped her become familiar with the equipment. But when she mentioned she wanted to DJ, the guys didn’t take her seriously.

Jackie O and Hamilton, aka DJ Lady Carol, started with vinyl and CDs. They learned how to beat-match and mix, and eventually integrated a laptop to make transitions smoother. Hamilton, a drummer, had the goods on beats and song structure.

As they approach their year anniversary, they look back on their start and laugh.

“Let’s just say we are so much better now,” Hamilton says with a smile.

Part of the duo’s mission is to bring a lesbian presence to the scene. Having a place for women in the queer community to dance and commune is important. No strangers to adversity, being queer or having feminist role models is motivation for many women breaking into a male-dominated field.

“There are a lot of gay clubs in Louisville, but hardly any space for lesbians,” Jackie O says. “It’s about pride. We are supporting our community while doing what we love.”

Bars across the city are beginning to take advantage of the city’s growing queer nightlife scene. Hotel, at Fourth Street Live, has started hosting “Hard Candy,” a gay-themed night that features the Lady Killers. Jackie O says she was hesitant to play the downtown spot after witnessing a homophobic assault on the strip, but the overall experience has changed her mind.

“I never thought we would do Fourth Street Live,” she says. “But we had a great time, and everyone was really nice. Getting a gig like Hotel means a lot to us. We know we are getting more established, and making a name for ourselves.”

The acceptance of queer female DJs at Fourth Street Live also came as a surprise to Victoria Taylor, a transgender woman who goes by the moniker DJ Syimone.

“I am open about who I am, my gender is part of the package,” she says. “Once people get to know me, they see I’m professional and good at what I do. I get treated with respect.”

She has worked Hotel and other “straight” clubs, like Prime Lounge and Icon in Evansville, Ind.

Taylor’s perspective on the acceptance of women in the nightlife scene is unique.

“I have the benefit of knowing both sides of the gender line,” she says. “Once people accept me as a woman, that’s how they treat me.”

She says establishing herself as a career DJ has pushed her to be more assertive, a character trait essential to breaking through.

Working in a musical environment has facilitated the acceptance she’s talking about.

“Music is full of love,” Taylor says. “Making music makes people happy, you can feel that when you are playing it. You have the power as a DJ to make people’s lives better. They come in and forget the bad day they’ve had and just have a good time. I love that I can be a part of that.”

“Wax On Wednesdays” at The Patron

First and Third Fridays
at the Monkey Wrench