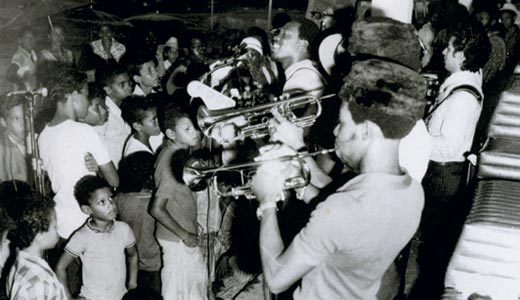 Roberto Gyemant’s headfirst dive into Panamanian music of the ’60s and ’70s is carefully curated: The second volume, Panama 2: Latin Sounds, Cumbia Tropical and Calypso Funk on the Isthmus, 1967-77, out June 9 on Soundway, is a hip-shaking time warp that Gyemant, originally from San Francisco, began in 2002.

In David, Panama, a hot, flat oven of a town known for shaved ice, Gyemant wandered into a radio station run by a DJ named Cristal, whose collection of vintage records numbered 10,000. The accidental explorer was hooked.

“It was among the 45s that I began to see labels I did not recognize — Sally Ruth, Loyola, Taboga, Tamayo. They all said ‘hecho en Panama’ (made in Panama), and thankfully most of them noted the songs’ genre on the label,” Gyemant writes in the liner notes of Vol. 1, released in 2006. “Two years and 10 trips later, there are two things I find to be true: one is that I love the people of Panama, and the other is that I am just beginning to make sense of both the beautiful complexity of their music as well as the time and environment in which it blossomed.”

LEO: Most of the music of that time was engineered by Eduardo “Balito” Chan. What made these musicians gravitate to him?
Roberto Gyemant: Panama is a small country. Balito had studied in Italy in the early 1960s, and on his return to Panama, was versed in the latest recording techniques. His abilities were recognized by a number of small entrepreneurs who formed labels to record the local talent in the mid 1960s. Soon he became the engineer to go to, based at Discos Istmenos.

I will say that I just got back from Panama with Will Holland (Quantic). Will has been using Balito to record Panamanian musicians for the last couple of years. They are both recording geeks who love to discuss rare microphones, positioning, tricks, etc. What can you say about an engineer’s sound? Balito knows how to get a great sound.

LEO: You point out that female vocals show up regularly in tipíca. What makes the style lend itself so easily to female singers?
RG: Another tough question. I don’t know exactly, and it strikes me that in the more “Spanish” punto forms, the male sings, but in cumbias and tipíca forms in general, female vocals dominate. I note that the tamborito, which is an early and very Afro-influenced form (still sung today), a woman sings the lead, a chorus of women reply (to percussion accompaniment). In the bullerengue and cumbias of Darien, which is on the way to Colombia, women’s voices also dominate, with the lead being the older woman, “the grandmother voice.” Interestingly, this same style became the most popular voice for male singers (Miguelito Cuni, Abelardo Barroso, Monguito el Unico) of the son montuno (the antecedent of salsa) in Cuba in the 1930s-60s. One thing about the women’s voices in tipíca music is that they sing forcefully, not soft or jazzy. They are countrywomen singing lusty and often sad songs, and the melodies are unusual (to my ears) and beautiful. I think life has always been hard work for a woman in the Panamanian interior, and their singing reflects that.

LEO: At the risk of sugarcoating a failure of humanity, would you go so far as to say racism breeds compelling art? You discuss in the liner notes the racial unrest in Panama, “Colombia’s ‘black province,’” and the explosion of different styles and genres that fused together in that time. The same might be said of what took place in the southern United States, with blues, and eventually rock ’n’ roll gestating in a segregated, unequal environment.
RG: This is a hard question. I have heard the theory that tough economic times, or a conservative social environment breeds great art. I don’t know if Panama fits that mold so easily. I have been reflecting recently that the racism in Cuba in the first four decades of the 20th century did make it spit out a number of excellent musicians, like seeds from a rotten fruit, which fertilized the music of a number of countries in Latin America. Venezuela, Colombia, Panama, Peru all got brilliant Cuban musicians, composers, arrangers. But Panama had people coming from all over, for many different reasons. Even the Cubans, who were pushed by racism, were also pulled by the opportunities (money) in Panama. The Afro-antilleans from Jamaica and Barbados came for jobs. Were their “home” island economies ignored/underdeveloped by the British because of racism in the first place?

It’s a complicated stew. On the one hand I would say that most of the musicians would probably have preferred less racism, so they could walk in the front door of the places they played, for example. Racism in housing kept poor people in the same neighborhoods in Panama, and kept them out in the street (small houses) where they interchanged ideas and played music together. Blacks of different nations (Jamaicans, Barbadians, Trinidadians, Martiniqueans) met, as did blacks and mestizos and poor whites. These later met black Americans in the canal zone, and black and Puerto Rican soldiers going to Vietnam.

Also, I do have a feeling that the anger of the injustices of racism must have fired up many composers’ creativity to some degree as well. I just found a spine-tingling gospel calypso from Panama called “Masters are Gone” that talks about Martin Luther’s assassination. It’s going on Panama 3, no doubt.

LEO: A tacit implication of compilations like this is that, for one, American audiences either don’t “know” or know little about Panamian music. Do you think the genre or genres have gone largely unrecognized, and if so, why?
RG: There is a kind of curtain that drapes over the gringo mind, and it begins at the Mexican border. Anything south of Mexico is unknown and hazy. This runs totally contrary to the history of the region. All of Ned Sublette’s books point out how connected New Orleans, Havana and Veracruz have been through the last 500 years. New York is and has been for over 70 years one of a string of Caribbean metropoli, along with Havana, San Juan, Santo Domingo, Caracas, Kingston, Panama City …

I think part of the message of the media machine in the U.S. presupposes that whatever comes from the U.S. (and England, for a while) is “it,” while everything else is peripheral, of anthropological interest only, is “world music.” This is an illusion. There is lovely, compelling music all over the planet. If we had Eminem’s budget, everyone in the world would be singing the music of The Mozambiques, The Exciters, etc.

LEO: One archival outlet you traveled to were radio stations in el Interior. Describe these radio stations, and what kept them from tossing a veritable goldmine?
RG: Will and I have been to every single radio station in the interior that had records. The few that kept them did so from the natural inertia of having a room or wall full of heavy objects that were difficult to move, or sometimes because they were considered “reliquias,” relics from a past time. I think a more interesting question is: Why did so many stations throw them out? This awareness of the objects of a past time’s “reliquia” status coexists with a drive for everything new and modern in Panama. It’s a country that sees itself as young and constantly modernizing, with little room for the past. When I canvassed the country for footage to make a documentary, I was shocked to find that the major channels, every one, threw out all their tapes from the past. All of them, taken to the dump, poured gasoline on them and burned them. In making the comps, we have run into similar issues. Most of the masters have been destroyed or were not kept in usable form.