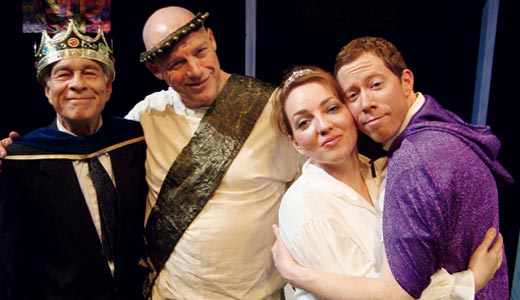 (The Louisville Repertory Company presents “The Coarse Acting Show” through May 17. Written by Michael Green. Directed by Amy Lewis. Call 584-7777 or visit www.lourep.org for more information.)

“The Coarse Acting Show” begins with an overture-cum-offertory that includes Ben Folds Five, Journey, Maroon 5 and Eminem. This is funny to church-going audience members who also know pop music lyrics. By the time keyboardist Nick Smith cries out, “If you had one chance — to play a song for church — would you freak out, or would you just do it?,” the play reaches for Christopher Guest-funny.

Louisville Repertory Company occasionally rises to the heights of “Waiting for Guffman,” Guest’s 1996 movie parody of community theater that’s a paradigm of playwright Michael Green’s exposition on the art of the coarse actor: “The Coarse Actor [is] one who performs … amid lethal props. [His] aim is to upstage the rest of the cast. His hope is to be dead by Act Two so that he can spend the rest of the time in the bar. His problems? Everyone else connected with the production.”

A play-within-a-play construct is LRC’s own coloring outside the lines. “The Lord’s Repertory Company” (the audience receives two playbills; read the fake one) is a cast of church members presenting “A Night of Passion.” Therein lies Green’s own spoofs on classic literature: “Ishmael and the Great White Whale,” “All’s Well That Ends How You Like It.”

It’s all the business betwixt and between, though, that kills. Kate Barry, who acts as the stage manager, wears a “Cats” T-shirt. Minister Darren McGee, filling time between plays, insists that choir member Tiffany Taylor bless the audience with the hymn “Make Me a Sanctuary.” She hesitantly does, bedecked in a Frederick’s of Hollywood maid costume. The set changes from murder mystery “Streuth” to French farce “A Fish in Her Kettle” by posting sun-faded Eiffel Tower tourist prints on the wall.

Comedy that appears effortless is propped by serious discipline. Staging must be clean so the actors don’t hurt themselves and the audience doesn’t feel apprehensive. Line readings must be rubber-band tight.

Director Amy Lewis allows too much slack in both staging and delivery. It’s most notable in the interaction between the minister and his wife, but nearly every scene needs its belt taken in a notch. As it is, focus is on the lazy pace as opposed to the sly subtleties of the scripts.

And funny is in the details. Wearing control-top tights, Nick Smith, reminiscent of the Chris Farley School of Comedy, is better delicately weaving and fluting through the sleeping royals in “All’s Well” than in blaring his closing monologue. He’s not a bad actor, but he plays a really good one.