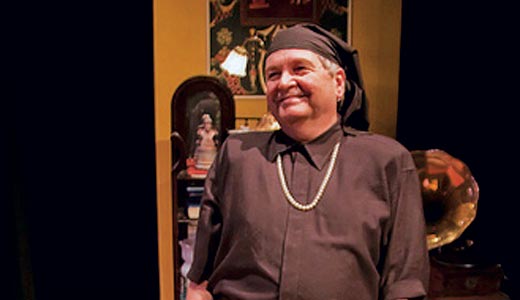 (Pandora Productions presents Doug Wright’s “I Am My Own Wife,” directed by Rand Harmon. Continues through May 23 in the Bunbury Theatre. For tickets, call 216-5502 or visit www.pandoraprods.org.)

A curator is both guardian and steward, charged with managing the affairs of objects and meticulously attending to their preservation. German transvestite Charlotte von Mahlsdorf saved a Berlin manor house from demolition in 1958, filling it with German artifacts from the late 19th century and saving entire interiors of culturally significant institutions from looting and destruction. But history is not found only in objects. Playwright Doug Wright is a curator of Charlotte von Mahlsdorf’s life, preserving her voice and spirit in “I Am My Own Wife,” arguably the most challenging contemporary one-man play.

A successful production of “I Am My Own Wife” depends almost entirely on the actor. If the role of Charlotte wasn’t challenging enough, the actor must also act the part of more than 30 characters — including Nazis, Stasi officials and the playwright himself — all in a dress and pearls, often switching on a dime to deliver all dialogue in a scene. Pandora Productions closes its season with a spellbinding performance by Roger Fristoe, who reveals, scene by scene, the steel will underlying Charlotte’s delicate mannerisms and the heartbreak behind her gracious smile.

Von Mahlsdorf’s story is a testament to human resilience. Her determination to live by her own rules under two of the most oppressive regimes of 20th-century Europe — the Nazis and the Communists — had roots in a brutal childhood. Born Lothar Berfelde, she started wearing women’s clothing as a child in dangerous Nazi-controlled Berlin. She survived a run-in with the SS near the end of the war, and in 1944, Charlotte killed her Nazi father, who had terrorized her mother and forced Charlotte to join the Hitler youth. In the scenes detailing her childhood, Fristoe captures both the innocent wonder and the fierce survivor instincts that served as the base of Charlotte’s character and the foundation for her singular story.

After the fall of the Third Reich, Charlotte began collecting items from empty houses, creating her Gründerzeit Museum, a showcase of antiquities that became a center of gay life in communist East Berlin. Her relationship with fellow collector Alfred Kirschner remains shadowed by controversy, as she has been accused of collaborating with the Stasi, who arrested Kirschner for illegal sales in which Charlotte had also participated. The text does little in the way of disambiguation, but thanks to Fristoe’s tender portrayal, we, like the playwright, want to believe she was a dissident all along. Spy/saboteur, man/woman, coquette/warrior — Charlotte von Mahlsdorf was a study in contradiction, a fascinating compound with many contrasting parts.

The most haunting contradiction of the production is the barbed wire fence lining the back of the stage, partially obscured by a scrim. A crucial piece of the set for “Bent” (Pandora’s Holocaust drama showing now on the same stage), the fence, though muted, contrasts sharply with Charlotte’s genteel antiques and serves as a constant visual reminder of the oppression she survived, from the threat of concentration camps to the Berlin wall, and of the contradictions inherent in her extraordinary life.