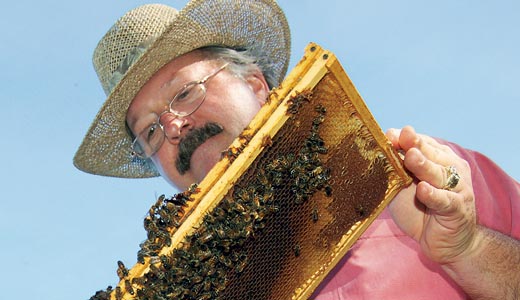 Speaking of another sweet nectar of the gods, let’s talk honey. More specifically, where honey comes from — the honeybee. Confession: I was not nice to bees in my childhood. There was an open field next to our house, and my brothers and I deemed it our playground. We owned it. We would catch bees with old plastic butter dishes while they rested on dandelions. Then we’d toss the dishes in the air and shake them like a James Bond martini. The bees would stumble out of the dish, dazed and confused, walk a few inches and then fall into the water trap we set for them. I’m not proud of this. I can’t even tell you why we did this*, other than Mom probably took away our Atari for the day.

I’ve been feeling guilty about this for years, and even forced myself to drink Honey Brown in college. So when I saw a notice a few weeks ago of a honeybee workshop at Foxhollow Farm in Crestwood, I knew I had to go — if nothing else then for my karma’s sake. Could I possibly make nice with the bees? Would they forgive the sins of a 7-year-old or viciously attack me as retribution?

The friendly Richard Hosey and his sons, who own and operate Hosey Honey in Midway and have more than 50 years of beekeeping experience, ran the workshop. The first part included an informative slide show, and during the second we were to traipse around a field to get up close and personal with the bees.

Mr. Hosey is in love with the bee, and it was easy to pick up on his adoration as he spouted facts. I asked him afterward what it is about this creature that’s so fascinating.

“Everything a honeybee touches is enhanced — they are not predators to anything,” he said. “They provide the world with so many gifts — from a third of the food we eat, priceless seeds, amazing honey and pollen … and even their venom is used for healing.” I’ll take his word on that one.

Here are a few things I managed to scribble down: Bees hibernate in winter; they don’t defecate in their hive; it’s about 94 degrees at the core of their cluster; Guard Bees are the ones who sting, and once they sting, they die; bee stings can help arthritis; and something about a Waggle Dance. I also learned that in the last 25 years, the bee population has decreased by 70-80 percent, a fact that has most beekeepers worried. They point to the use of powerful pesticides and loss of land to development as the main causes.

OK, class dismissed. It was time to go meet my (honey)maker. Mr. Hosey led us through a field to Foxhollow’s handful of white bee boxes. He offered up some beekeeper outfits similar to a Storm Trooper costume (I declined) and began to take apart one of the boxes in an attempt to find the Queen. And show us the honey. The Guard Bees were circling, and I felt like chum. Luckily, Mr. Hosey brought smoke, which tends to keep bees at bay. Turns out honey to a bee is like Maker’s Mark to me — when smoke is shot into their nest, the bees freak out and immediately take a big swig of honey to calm them down. Then they just sit there and debate the last episode of “The Hills.”

We finally got a glimpse of the Queen and the inner layers of a beehive. Turns out Honey Combs cereal is patterned after real honeycomb after all. We also got a sample of honey straight from the hive, which was delicious in all its sticky-sweet glory. No bees ever came too close, and as I left the farm that day, I felt as if my bee karma was restored. I have a newfound respect for the honeybee, and my fear of them has quietly dissipated. Next up: spiders, thunderstorms and sobriety.

*Well, I did receive my first kiss after my brother’s friend dared me to catch the feared yellow jacket. Mission accomplished.