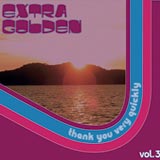 Why’s it difficult to blend Afrobeat rhythms with guitar-heavy rock? There have been plenty of successful one-offs that were considered “fusion” — think Talking Heads, Paul Simon, Peter Gabriel and recently Vampire Weekend. But each was eventually tainted with percussion-happy pastiche. The half-Kenyan, half-American group Extra Golden now has a breakthrough with their third album. On opener “Gimakiny Akia,” the power chords feel as natural, as expected and as needed as the roiling percussion. The other five tracks don’t achieve quite so high an orbit, but no one will think that this is either a Western group who’s looking to scratch an itch, or a benga band stretching to imitate college radio. Keyboards aren’t overemployed with burbles to bridge the musical maps — here, they’re simply good atmosphere. The American guitarists don’t sound like they’re simply here to learn and try to keep up — their duels with the slurring and snapping drums are beautiful. The singing, only some in English, conveys social protests and observations, but also rocking out and dancing.