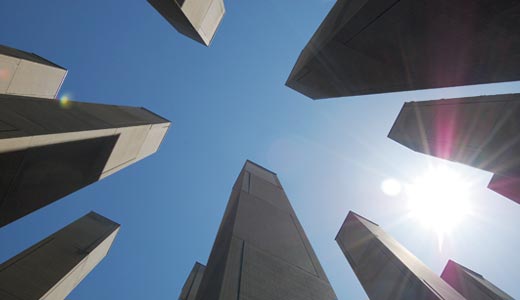 We are near the end of a two-hour architecture tour of Columbus, Ind. — pop. 39,817 — when I finally ask Carole Rice, the affable volunteer guide sitting at the front of the bus, why all the yards we’ve seen are so clean.

“For the most part, there’s a lot of pride in this town,” she says with a sort of half-smile, taking the microphone down toward her legs. As I nod politely, because everything that seems to happen in Columbus is polite, Rice tells me the people here “want to do well.”

We are parked outside North Christian Church, a flying saucer sort of building atop whose 195-foot steeple rests a five-foot gold-leaf cross. The church, designed by the Finnish-American architect Eliel Saarinen, sits on 14 pristinely landscaped acres in what Rice chummily refers to as the “suburbs” of Columbus, a swatch of sprawl a few miles outside the “Truman Show”-style downtown, which is a postcard of small-town America — but with the cold brick and hard angles of a modern, industrialized city.

Columbus is ranked sixth for innovation and design by the American Institute of Architects, placing it among the pedigree of cities like Chicago, New York and San Francisco. If this seems strange to you, it is: Columbus has three institutions of higher education, one Fortune 500 company and a median income of just over $41,000 a year. More than 40 churches serve its modest population, the vast majority of which is white. Every lawn I see — every single one — is a candidate for an HGTV profile.

Why is this odd little burg between Louisville and Indianapolis packed full of modern, progressive architecture?

The native son led the Cummins Corporation, known for diesel engines, to its WWII-era prominence. A lay leader in the Christian Ecumenical Movement (thus explaining all the churches?), Miller commissioned Saarinen in 1942 to design the First Christian Church, recognizable for its bell tower, a massive brick column that stands separate from the sanctuary. The church is so revered in Columbus that the glass facade of the Cleo Rogers Memorial Library across the street — designed by I.M. Pei and Partners — perfectly frames its frontage, if you’re looking from the inside.

Miller created the Cummins Engine Foundation Architecture Program, which became the city’s principle benefactor, and swung open the doors of his fledgling hometown to any architect with a vision. And they came in droves: Harry Weese, Kevin Roche and Eero Saarinen, son of Eliel — to name a few. There is also substantial public art, including pieces by Henry Moore and Bernar Venet.

Even the banks have moxie.

Although city leaders have modernized aspects of Columbus and its buildings in the recent past — the city has a decidedly new feel — they strive to stay true to both the architects’ and Miller’s vision.

“What is built reflects what a city thinks of itself and what it aims to be,” Miller famously said. “Mediocrity is expensive.” —Stephen George