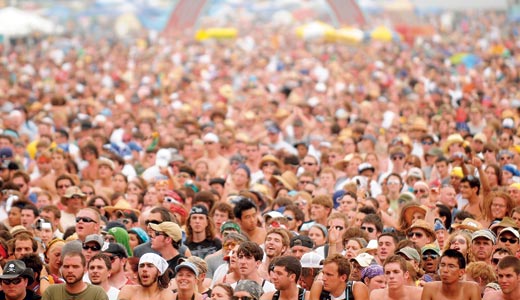 What do serpentine lines, heat exhaustion, smelly hippies, EMTs, the haze of pot smoke, drunk misanthropes and hefty ticket prices have in common?

They’re at a summer festival near you.

Bonnaroo, Coachella, Langerado, Outside Lands, Pitchfork, Lollapalooza — doesn’t matter. Where there’s a throng of musos, self-inflicted cliffhanger moments are practically guaranteed. Do’s and don’ts follow, and most of this, fellow rockers, jazzers, hip-hoppers and trance-heads, is common sense:

1. Patience: You will be in traffic for hours. You will struggle to find parking. Unless you get up at dawn, once you park your hybrid VW bus, you probably will stand in line again to get in. Even after you’ve bought your ticket. Do not lose your cool before the bands plug in. Wait it out. You’re gonna be there a while, anyway. If you’re close, ride a bike.

2. Water: H2O could be the only thing keeping you off a gurney. We all know what July and August in the mid-south are like, but even with the dry heat out west, you’ll dehydrate just as fast.

“Our biggest concern is dehydration and heat exhaustion, which can lead to heat stroke,” says RN and U of L Nursing School professor Heather Mitchell. “We would recommend plenty of fluids. Water or sports drinks are two of the best choices.” Avoid cokes or drinks that have a lot of caffeine in them: “It actually causes people to lose more fluid.”

3. Drugs: Are there. You know it. I know it. Unless you wanna spend a night in jail defecating in front of 50 strangers, leave ’em at home. Arrest rates are generally low at summer festivals, but when they happen, they are highly publicized.

According to the site festivalcrashers.blogspot.com, police at a Phish concert in Hampton, Va., arrested 245 people, seized $1.2 million in dope and $68,000 cash. Fish in a barrel?

4. Shoes: Being at a festival means you’ll be walking from stage to stage, to the bathroom, to grab a bite, to get a beer. Unless you have innate warp speed, you won’t be able to catch each band’s complete set, so keep your dogs happy. In this environment, comfortable is classy and vice versa. Sandals and flip-flops might not score you a backstage pass, but neither will a twisted ankle.

5. Sunscreen: Hmmm … something about skin cancer isn’t funny. Can’t seem to put my finger on it.

According to the American Cancer Society, there were 59,940 new cases of melanoma nationwide in 2007, and 8,110 of those were fatal. The survival rate post-diagnosis was 91 percent; it also stands to reason that SPF could mean “skin protected forever.” It is the largest organ on your body.

6. Earplugs: If you’re the kind of concertgoer who likes to be up close, you might need ’em. According to The National Institute on Deafness and Other Communication Disorders, roughly 15 percent (26 million) of Americans between ages 20 and 69 have high frequency hearing loss because of loud sounds or noise “at work or in leisure activities.”