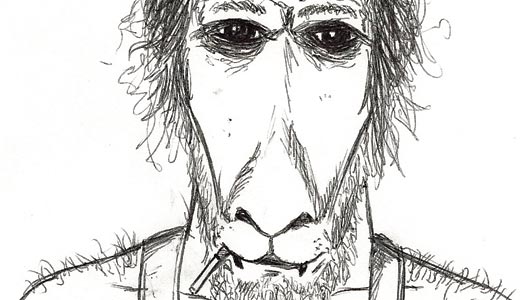 For generations, good Louisvillians have steered clear of the Norfolk Southern rail trestle that spans the curious patch of land known as Pope Lick Creek, just east of the Gene Snyder Freeway. And why not? Any one of the city’s numerous, award-winning parks could easily suffice, in the frightened estimation of these pious citizens, for that typical summer jaunt into the untamed wilderness, sans automobile, and the worries that often accompany interstate travel.

Yet to the curious, thrill-seeking and potentially drug-abusing set of bad Louisvillians, the allure of this ancient trestle — and the Pope Lick Goatman who has called the creek home since the late 1940s — is decidedly overwhelming.

Speaking of which, there are conflicting accounts of the beast’s true nature: Some claim that the cryptid was an abused circus freak who escaped from the boxcar he was confined to, leapt into the creek below and vowed revenge on his persecutors. Others attest that it’s really the corporal manifestation of an evil farmer who, in exchange for Satanic powers, sacrificed goats. (Think H.P. Lovecraft meets “Little House on the Prairie.”)

Over the years, the site became a destination for teenagers in search of a creepy place to have sex and then, in true horror movie fashion, die in the most horrific way imaginable. A short film chronicled the phenomenon, “The Legend of the Pope Lick Monster,” which was released by native filmmaker Ron Schildknecht and which prompted fears that it would only increase undue interest (not to mention the body count). An eight-foot security fence was installed shortly thereafter to keep the humans out, and the monster in.

At first glance, the wilderness that encompasses the dastardly creek of Pope Lick is lush and beautiful, retaining much of the placid, rural feeling the area must have had when the Goatman first began his reign of terror. The trestle itself is old, cordoned off with the aforementioned fence, its mighty pillars plunging into the creek below. From a distance, light traffic from nearby Taylorsville Road can be heard.

Once the sun has set and a full moon risen, however, there will come a rustling of the bushes, the click-clack of hooves on wet rock. Standing before you is, of course, the Pope Lick Monster, his signature horns protruding from a mane of greasy hair. He hands you a button of peyote, his face brooding, intense. You have no choice but to take it and embark on a vision quest heading south, through Floyds Fork, evading the Goatman’s trickery all the while …

Once the moon has set and the sun risen you will wake up, naked and shivering in the early morning cold with a buzzing headache and red hoof marks all over your body (assuming you forgot to wear a pendant imbued with wolfsbane, that is). Life will never be the same.

If this sounds like a jolly good time — or if you’ve a burning death wish — hop on a bus or bike out to pay the Pope Lick Monster a visit anytime. He never sleeps. —Jonathan Meador