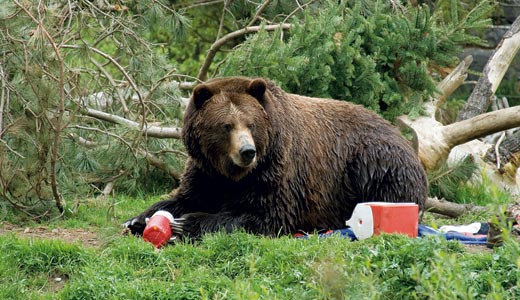 I am a big fan of camping, but that wasn’t always the case.

As much as I love the outdoors, there are certain comforts I have come to expect, like vermin-free shelter, food that hasn’t been tampered with by woodland creatures, and a reasonable degree of certainty that I’m not going to die.

This, I believe, is not too much to ask.

But for years I found myself in unpleasant camping situations, and the brunt of the blame is not mine to bear.

There was the time several friends convinced me to embark on a two-night trip in the Great Smoky Mountains. It would be my first experience camping in the backcountry for multiple nights, and they lured me with promises of s’mores, libations and campfire conversation.

It turned out my rugged companions were not completely forthcoming, failing to mention our getaway involved hiking to the highest point in Tennessee. Not aware of the 6,643-foot-high journey awaiting me, the night before I indulged in copious amounts of Milwaukee’s Best (I was in college) and countless Basic Lights (again, college). As a result, the vertical, mid-summer hike was pure hell, but I made it to the top, albeit well behind my friends, and not before getting tangled in a dense maze of rhododendron.

My next foray into the wilderness involved hiking a portion of the Appalachian Trail. This time I treated my liver and lungs with care, and was an adept hiker as a result. In fact, all was going well until bedtime. And by bed I mean a wooden plank inside a stone shelter meant to protect us from black bears. Oh, and we shared it with fellow hikers.

I drifted off to sleep wedged between my future husband and an unkempt woman who had been hiking alone for what smelled like several months. A short time later I awoke to find mice scurrying across my sleeping bag. I screamed; the unkempt hiker shushed me; the future husband did not stir; and I grabbed my sleeping bag and headed outside, taking my chances with the bears.

The final straw came in West Virginia. It was the first warm weekend of the year, and the aforementioned future husband was itching to get his Thoreau fix. And so we set out in early March — with the dog — to hike up a mountain.

My first clue that this trip was ill advised came at the start of our trek, when a hunter warned, “Look out for folks with shotguns.” I laughed; he did not. As we continued on, he added, “Watch out for rattlers.”

A few minutes into our ascent there was a dusting of snow on the ground. An hour later it was getting dark, the snow was six inches deep, my feet were wet, Lucy’s paws were raw, there were bear tracks, and we were lost. After several spats and one tearful meltdown, we found our “rustic retreat,” a 6-by-6-foot shelter with cots and a wood-burning stove. But hey, we were alive and there was a double bottle of wine in my backpack.

After all these experiences, I’ve learned I must really love the outdoors to keep going back. But I’ve also discovered such unpleasantries don’t have to accompany sleeping under the stars. That being said, here is a brief excerpt from my extensive set of camping guidelines, which is subject to change with the seasons:

1. I must know exactly what I’m getting into — I want maps and exact mileage and trail names and up-to-date weather conditions in advance.

2. No sleeping in shelters described as rustic or communal. If there is a chance a bear will attack me in my tent, then I probably should not be sleeping in that area.

3. Always assume my husband and my friends are liars, at least when it comes to matters of camping, and make decisions accordingly.

That being said, maybe our paths will cross in the great outdoors this summer. —Sarah Kelley

Great camping for a nearby summer getaway. Each spot offers both campgrounds with amenities and backcountry sites.

Land Between the Lakes