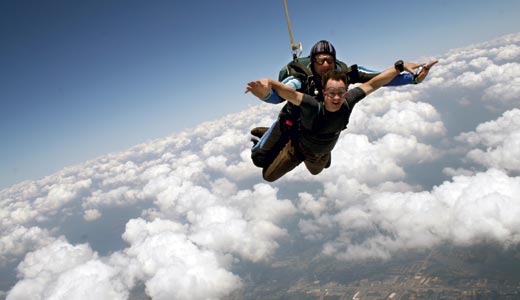 Who wants to skydive?

A group of my friends decided to do this. I figured everyone would chicken-out before me and I wouldn’t have to go. Well, a few months passed and two people backed out … but three more joined.

Fast-forward about three weeks to the morning of “drop day.” I didn’t sleep a wink the night before. At 8 a.m. we arrived in Elizabethtown, Ky., at the headquarters of Skydive Kentucky. It was a clear and sunny day, which meant the weather was not going to bail me out.

The first reality check would come in the form of the legal documents I had to skim and sign to make sure I was freeing the skydive company of any and all liability, should I become instant fertilizer at their doing. We had to watch a video of a man in a suit with a fake bookcase behind him telling us that if we have any intentions of suing, or most likely would sue in the case of injury or death, we should leave now. But they’d be more than happy to tell us where else we could go to skydive.

Next we had our 15 minutes of training with the pro tandem instructors. You have to jump tandem with a pro strapped to your back if you have no experience. Some of these guys had jumped more than 5,000 times, which means they wore the chute. We were separated into groups and cinched up tight in our harnesses, ready to “meet the plane,” as they say.

I was in the last group to jump, so I had to bear the anticipation as my friends fell from the clouds. All arrived safely on the ground, and when I asked how it was, they all said the same things: unbelievable … indescribable.

They didn’t ruin the surprise.

My plane approached the desired altitude — 13,500 feet. I had paid the extra fee to have a photographer fly alongside me, and that somehow eased my mind on the ride up. But that distraction quickly gave way to speechless fear as the door opened and people, one by one, disappeared, like being sucked out by a giant vacuum.

I was next. On my knees with my instructor strapped on, I waddled toward the door. My arms were crossed tightly across my chest as instructed. I was supposed to keep my head up and back arched to help stabilize our center of gravity. Instead, my curiosity got the best of me and I turned my head toward sweet Mother Earth, scanning the horizon. What a beautiful, terrifying vision.

“One … Two …” (what happened to three?) and out the door we tumbled. I had no idea which way was up or down. I struggled to breathe as our 120-mile-an-hour speed forced air into my nose and mouth. It was loud. But after about seven seconds and 1,000 feet, things became a little less chaotic. I felt like I was floating, not falling. Thirty more seconds and several thousand more feet and it was time to pull the ripcord. In an instant, I was in the middle of the quietest space I’ve ever experienced, floating under the canopy. True serenity and awe. Not a religious experience necessarily, but I don’t think I’ve ever thanked God more. —James Hewett