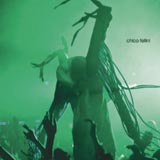 Despite their name, Chico Fellini’s scope never feels cinematic; rather, their self-titled debut is insular and airless in a way that still manages to conjure plenty of drama in its own right. The band is light on their feet, but any air in the mix is consumed by Christopher Dennison’s imperious, scenery-chewing croon. Dennison’s vocals always threaten to spiral out of control, and “Hot” is nearly derailed by a campy, Robert Smith-like falsetto. But the band’s approach usually works in their favor, especially on the surprisingly funky “Electrolyte” and “Despite the Mix Up,” which walks a Modest Mouse tightrope. Elsewhere, “Down the Up Ladder” is an effective, classicist ballad, while “No Strata” thrusts like an angular “Ain’t Talkin’ Bout Love.” Chico Fellini are still a few years off from their 8½, but for a debut, an I Vitelloni isn’t half bad.