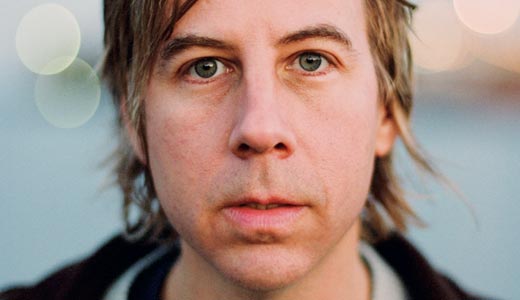 Romanian Names is the new album from John Vanderslice, and it hits the streets May 19. LEO caught up post-rehearsal.

LEO: What has kept your working relationship with producer Scott Solter (Spoon, Okkervil River, Two Gallants) going for so long?
John Vanderslice: He’s a total genius. Man, he’s a badass. When I think about how many hours we’ve spent together in the control room — and keep in mind he also works at the studio (Tiny Telephone in San Francisco), so I see him all the time. He’s kind of an astonishing person in the way that he does not repeat his methods very often — he’s constantly digging and searching. He’s very restless and extremely open-minded.

LEO: He’s remixed quite a bit of your work. What’s your philosophy on remixes, and how significant is that for you — to go back and revisit material that’s already been “finished”?
JV: That was all him. I had nothing to do with the (2005) Pixel (Revolt) remixes, and I had a little bit to do with (2004) MGM Endings remix, where I would frame the song. I would say, “I want this to be the most distorted thing that you’ve ever done in your life,” or “You can only use the vibraphone track from this song.” I gave him some markers, but you know even then, it wasn’t necessarily relevant what I was saying. I’m stunned that he isn’t hired to do soundtrack work, because his work is so clearly cinematic.

LEO: Romanian Names feels like a real headphone record. Do you keep that sort of thing in mind, making sure details of the instruments jump out?
JV: Part of it may be that I grew up really listening to records on headphones, so I kind of wanted that layering and that spatial stuff to be part of it. That, to me, was always part of what a record is supposed to do. The other part of it is, I like multi-tracking. I like the additive effects of counterpoint and of those sonic details. For a long-term listener, it’s a really interesting process of discovery. It’s like detail in a painting or something, looking at a Botticelli, and you’re stunned at the stuff you didn’t see the first time you were at the national gallery.

LEO: What singers influence you, and what singers do you gravitate to?
JV: Britt Daniel from Spoon has always been one of my favorite singers. There’s two kinds of people I really like: I like people who do incredibly intricate phrasing and very detailed scanning, stuff that is rhythmically so unusual and interesting. Rap would certainly fall in this category. The stuff that Chuck D or KRS-One or Li’l Wayne — there’s some stuff on that record The Draught 3 that is ridiculously complicated rhythmically. It’s so intricate. I would definitely say that (The Mountain Goats’) John Darnielle, his scanning is incredibly complicated. Just check out the phrasing. A lot of those words — he found a way to phrase those words. That’s one reason why he can have such unusual vocabulary in his songs — he really knows how to make things scan.

LEO: What about the songs that didn’t make it on the record? Tell me about those.
JV: They all were children drowned in the lake [laughs]. No, there were three tunes that we’re just mind-bogglingly bad, like, “Wow, we did that? That’s what we came up with all this brainpower?” But you’ve gotta make your fucking “Ishtar.” It’s really important to go so far out that you’ve lost any charm in your music. If you don’t do that …

What I discovered is that if you’re writing a record, and you’re really shooting for 14 songs, well, you know a record is 12 songs plus a bonus track, straight up, a bonus track or an iTunes release. It doesn’t give you any wiggle room. I shot for 24 songs, and we finished and mixed 24 songs, totally produced. That was a good lesson. If the lyrics are dull or if the melody line is pedestrian, good luck, you’re not going to ever fix it. There’s five or six songs that are still in a holding pattern that might come out on a tour EP.

LEO: You switched labels for this release, and a lot of artists talk about how they change things up from record to record, but I’m wondering what doesn’t change for you.
JV: Treated piano has become something I cannot let go of. There’s effected grand piano on every record. Acoustic guitar, whether distorted, tape-speed shifted or re-voiced as a 12-string — that has also become very important to me. It’s mostly about drums, bass and pianos. More and more it’s harmony vocals. There’s only one song on the record that doesn’t have harmony. Those elements have been there. Who knows about the next record? It is very important to sham stuff.