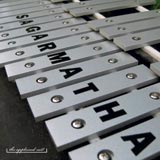 It’s undeniable now. We’re living in a post-emo world. Seasoned Lawrence, Kansas-based The Appleseed Cast, who cut their teeth with Sunny Day Real Estate-inspired rock, have unleashed a post-emo (primarily) instrumental album with Sagarmatha. Like their previous five records, this one is guitar-centric, but rather than being driven by booming downbeats and keyboard blips, on Sagarmatha, guitars lay the foundation for a sprawling arena-ready atmosphere. The first three tracks bleed into one another, lurching along dragging the sound of wind, chimes and mechanical vocals, which are so low in the mix and so artificially produced they seem just like another instrument. Emo comes in (and I’m not talking about emo like that girl on YouTube) the approach to each song: damn the torpedoes and full speed ahead. If there was ever such a thing as an earnest instrumental, The Appleseed Cast have found it. It’s quite nice, but comes off a bit unsupported. In “The Summer Before” and “An Army of Fireflies,” the pretense of the album seems to evaporate before desire and playfulness, and really that’s the best parts of emo, and the kind worth keeping around.