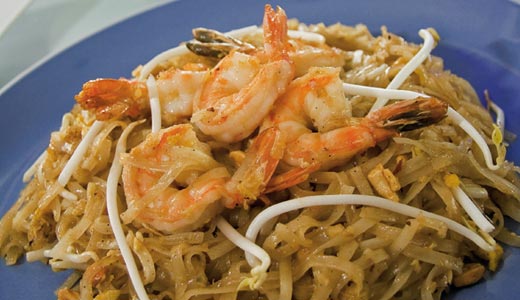 Does size matter? Some of the Metro’s tiniest restaurants rank among its most cozy and attractive. From this assertion I do not exclude New Albany’s iconic Little Chef, a 10-seat diner so small that it once wore wheels; or, for that matter, the trendy, crowded, noisy and compact new 732 Social on East Market Street, about which we’ll be telling you more anon.

This week, though, we turn to another Lilliputian favorite, Simply Thai, housed in the freestanding building at the corner of Wallace and Wilmington avenues in St. Matthews.

Succeeding a short-lived barbecue joint and a forgettable Chinese fast-food eatery, Simply Thai crams about eight tables into a small space, with a couple more patio tables out front.

Simply Thai is halfway through its third year in business, and by all signs it’s a success. Just about every evening, every table is filled with happy diners. I’ve seen people clad in parkas, knit caps and gloves gutting it out at the outdoor tables in frightful weather, accepting a wintry environment if that’s what it takes to enjoy what may be the city’s best Thai fare.

Make that Thai and Japanese fare, actually. Owner Mahn Saing, who is Burmese, and his Thai wife, a classically trained chef, have scored with a concise menu that includes traditional Thai dishes, well-made sushi and a few upscale Thai-style “fusion” dinner entrees, all under $20.

There’s a short, modestly priced wine list and short beer list including a few Asian beers. We tried a couple of Harbin lagers from Wuhan, China, and found them a passable lager-style brew, a notch above mass-market domestics and a real buy on sale this evening at $2.50 per bottle. Wine and beer (on request) are served in new-style stemless wine glasses, a fun way to drink wine or beer.

An appetizer order of tod mun moo ($4.99) proved a hearty starter. Six dense pork meatballs, three to a skewer, carried just a touch of spicy heat, good rich pork flavor and a subtle, not overly spicy, hint of fresh ginger and garlic. They were served with a pretty, golden spicy pineapple sauce.

The house salad ($6.50, divided for two) was served in an offbeat plate that would be challenging to the obsessive: It sits naturally at an angle, leaning to one side, generating a strong desire to push the high side down so it would stay flat. Upon dealing with this OCD issue, I moved on to discover a well-prepared mix of Mesclun lettuces, shredded carrot, sliced red onion, sliced cucumbers and a slice of pale, out-of-season tomato. Thick ginger sauce served on the side was similar but not identical to the ubiquitous Japanese-restaurant salad dressing. A Thai-style peanut dressing is also available.

Another special appetizer from the Japanese side of the menu, Thai Spicy Tuna Roll ($7.50), was a standard sushi-maki, black nori seaweed rolled around sticky sushi rice with a piece of beefy tuna and a crunchy slice of cucumber at the center; a dash of something fiery — Southeast Asian sriracha sauce, perhaps — added a touch of zest.

A daily special eggplant dish ($10) offered a great mix of flavors. It consisted of stir-fried rounds of small Asian eggplant, sizzling hot, creamy and steaming within, tossed with crunchy oblongs of fried tofu and thin strips of fresh basil chiffonade in a smooth, sweet-tart brown sauce.

Pad thai ($10 with shrimp, $8 otherwise) was excellent, featuring all the expected ingredients and flavors: a blend of contrasting textures between soft rice noodles and crisp bean sprouts put in at the end so they stayed that way; bits of scrambled egg and chopped peanut; an exotic scent of nam pla fish sauce; and a half-dozen perfect shrimp with their tails on.

Service was friendly and chirpy, but the tables are so small, it would be nice if they made a little more effort to clear away finished serving plates before they start piling up.

Dinner for two, with two Chinese beers, came to a total of $47.69, which is well below bistro territory, plus a $10 tip for courteous, if sometimes distracted, service.