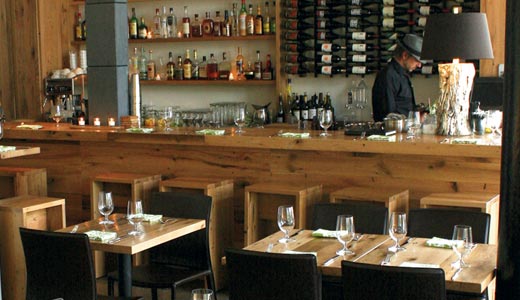 As soon as I read about 732 Social coming to East Market Street, I knew I was going to love it. It would be as urban as urban could get, chic and trendy yet “green” as grass, and it would spit in the face of the recession, boldly stepping out where a string of lovable but short-lived eateries have failed.

Here’s the scenario: Brothers Steven and Michael Ton of Basa join Chef Jayson Lewellyn, late of Jeff Ruby’s. They present quality fare — lots of small plates, and some large ones, too — that goes beyond mere fusion to blend the flavors of Europe, the Americas and Asia. They set it forth in the certifiably trendy Green Building, making adaptive reuse of well-worn barn wood and subtle tones, of course, to keep it close to the earth.

And, as the name suggests, they sought to build a consciously “social” environment, with tightly spaced tables and a community vibe that would encourage diners to converse with their neighbors and maybe even share bites or make new friends.

What a concept. Sure enough, when 732 Social finally opened around the end of March, it started packing diners in, and it’s been slammed ever since.

It sounded like a perfect place for my wife, Mary, and me to invite our friend Lucinda to join us. Lucinda is a foodie and a wine geek, and we had been looking for an opportunity to get together, dine and drink and talk and laugh until wine came out our noses.

As it turned out, 732 Social scores on most of those points. The food was outstanding, the mood was delightful, and we loved the wine and beer lists, not to mention — at least in theory — the Depression-era cocktails.

But the “social” goal fell short for us. This place is popular, it is crowded, and it is noisy. Very, very noisy — hard edges, big-crowd-in-a-small-room noisy. So noisy that we had to lean close enough to yell at each other as we cupped our hands behind our ears, which isn’t really all that conducive to friendly conversation. We’ll try that again another day soon in another, quieter place.

But the food and drink? Oh, my.

The menu is varied enough to offer a little something for everyone, without being so complex as to push the kitchen beyond its limits. Seven small plates range in price from $7 to $11. Large plates are $7 to $20, plus “cow” (beef) dishes at $26, and cheese and charcuterie plates varying in price depending on how many you choose.

We eagerly went over the menu and decided that a selection of small plates, mostly, placed in the middle of the table for sharing, would suit us just fine.

Here’s the joy of small-plate sharing: Lucinda doesn’t like beets, and she’s not crazy about brussels sprouts. This seemed at first to rule out three of the small plates. Mary loves beets, so more for her. I like frisée and so does Lucinda, but Mary isn’t enthused. However, she’s open for just about everything else, and mussels and Castello blue cheese are definitely two thumbs up for us all.

So put a bunch of plates on the table, grab a fork, take what you like, and one of your pals will likely scarf up the bits you pass by.

So, Lucinda and I both liked the look of the Herb Roasted Ratatouille ($7). Mary wanted the roasted early beets ($7). I was eager to devour the frisée salad with smoked bacon, poached egg and cave aged Gruyère ($7), and Lucinda was smitten with the warm goat cheese, tot-soi and frisée greens with pomegranate vinaigrette ($7). We could all agree on a large plate (a large cast-iron pot, actually) of roasted mussels with garlic, fennel and white wine ($11), and nobody objected to a cheese plate featuring that mild Danish Castello Blue and a French goat’s milk Bucheron cheese from the Loire (two-cheese plate for $10).

732 Social, as noted, is a small room — the restaurant’s capacity of 60 includes tables out front. With its high ceilings, it’s basically a wooden cube with big glass windows. Tables and some of the walls are paneled with natural planks from an old Kentucky barn. A large painting on one beige wall bears a strange resemblance to a swatch from a colorful seersucker suit, or perhaps a giant square of tasteful wrapping paper.

The wine list includes lots of interesting items in the $20 and $30 range, not to mention a good choice of artisanal beers and “Prohibition-era” cocktails.

Lucinda and I shared wine-selection duty: I set parameters, either a Pinot Noir or a crisp, dry white to go with our choice of dishes. She zeroed in on a food-friendly white, Domaine Guindon 2007 Muscadet ($26), made in France’s Loire Valley (a natural match with the Bucheron cheese) from sustainably grown grapes.

The first two courses appeared similar, united in their lavish use of feathery, pale-green frisée, a slightly bitter lettuce akin to endive.

The roasted beets ($7) consisted of thin-sliced rounds of tiny roasted golden beets, not purple beets, topped with a mix of frisée and tot-soi, a peppery Asian salad green in the mustard family. It was dressed with a slightly sweet and fruity pomegranate Vinaigrette.

The frisée salad featured a mound of crisp, bitter frisée, too, this time garnished with bits of smoky bacon and earthy Gruyère cheese and topped with a small, neat poached egg. I found it addictive, but yes, I shared.

The ratatouille ($7) was beautifully composed, a spiral of super-thin roasted eggplant, zucchini and summer squash and plum tomato baked with onions and garlic and herbs.

The roasted mussels ($10), our one choice from the large plates side of the menu, was a large ration — maybe two dozen — perfectly fresh shellfish, cooked just right, infused with the elusive flavors of an intense broth … are there tiny shreds of fennel in there? Yes, or so the menu says … garlic, fennel and white wine. It won a rave review from all three of us, and we went through an extra batch of Blue Dog baguette slices to sop up all the goodies without wasting a drop.

There’s more — lots more. Steak frites, for example ($26), is extremely popular and looks extremely good. We passed only in favor of trying choices a bit more adventurous this time. But it beckons for a future visit, as do the charcuterie selections, more small plates and a closer look at more of the large plates.

Noise or no noise, this is a “we’ll be ba-aa-ack” establishment. Just come prepared to spend your time eating, not engaging in deep conversations about philosophical topics with your friends.

Pricing, despite the trendy vibe, is more than appropriate for recessionary times: An ample selection of dishes for three, plus a very decent if modest white wine, came to a nearly recession-proof $70.52, plus a $20 tip for server Kristin’s thoughtful, friendly yet non-obtrusive attention.