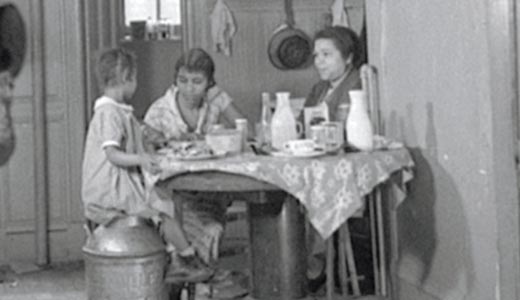 A group of people of various ages sitting in a kitchen — not exactly the most riveting image. It’s an average event, a moment that happens many times a day around the world. Yet it becomes special when revealed who made it and why it was made.

“Kitchen Scene, Harlem” is one of the 29 photographs featured in “First Exposure.” The University of Louisville Photographic Archives acquired the images over the last 10 years. The photographers range from emerging artists to more prominent names, and the images were taken from the 1930s to the 21st century in a variety of photographic processes.

It is the job of the U of L Photographic Archives to collect and store important photographs as well as the supporting paperwork. They are up to almost two million photographs, making them one of the most significant photographic archives and research centers in the United States.

Why did they choose “Kitchen Scene, Harlem”? Siskind is a prominent name in photographic history, yet he was just beginning to find his voice during his time in the Photo League. The League had evolved in the 1930s to become a school, gallery and group of up to 200 members. A few of its (eventually) famous members were Paul Strand, Lewis Hine and Siskind.

The League practiced documentary photography, a subset of photojournalism, which focuses on urban class struggles, race and labor issues. The group’s photographers did many series and individual images focusing on the social issues of the day.

Their most famous series is the Harlem Document. Siskind and seven other photographers met regularly with Michael Carter, an African-American sociologist, who helped them decide what needed to be photographed. The series was shown in exhibitions around New York City. Along with the arts movement of the Harlem Renaissance and social programs of the time, this photographic survey helped to foster change of some of the negative conditions New York African-Americans had to endure. Most notably, the Photo League has been credited with starting the discussion needed to mend the poor relations between local Jewish and African-American groups.

Siskind later donated his section of the Harlem Document to the International Museum of Photography in New York City.

The group was investigated for communist activity in the late 1940s and closed in 1951 under the fear of McCarthyism blacklisting (Siskind left the organization in 1941).

The U of L exhibition has many additional standout photographs, including the 2000 print “Fishmonger’s Daughter” by Michael Garlington, Ida Wyman’s “Girl with Curlers, Los Angeles, 1949,” and two images of Hunter S. Thompson.

‘First Exposure’
Through May 29
Photographic Archives Gallery
Ekstrom Library, U of L
852-6752
www.library.louisville.edu/ekstrom/special