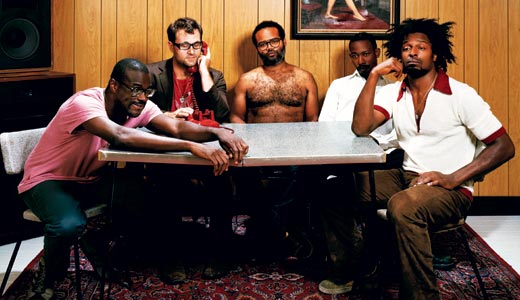 TV on the Radio returns to Louisville May 12 at Headliners Music Hall.Michael Lavine

TV On The Radio drummer Jaleel Bunton’s life has been quite different since he graduated from Atherton High School in 1992. Or maybe not. LEO Weekly caught up with him in advance of the homecoming show at Headliners on Tuesday.

LEO: How are you dealing with the success of Dear Science? You’re on the top of everyone’s year-end list.
Jaleel Bunton: [laughs] It’s really funny. For example: Right now, I’m talking to you, and I am driving my bike down Broadway [NYC] … going to court right now, because I got a ticket for riding my bike on the sidewalk. So I have to pay a fine. I’m coming from my business manager’s office, where I had to pay taxes. That hurt. But I’m still on my bike. What I’m trying to say is it doesn’t really change anything in our day-to-day lives. It’s not like, “Oh I’m famous,” or anything. Nobody told my landlord, nobody told, you know, whatever … I don’t want to sound unappreciative of the critics, but it doesn’t translate to my paycheck.

LEO: Like I say to friends of mine, “If props paid the rent …”
JB: Yeah! That’s how it is, man. Like in everything else you do, you have to keep your head. I’ve been wanting to do music, and I’m doing it right now. I feel really lucky to have any kind of success.

LEO: What’s the plan for 2009? New album? Solo stuff?
JB: I think one thing we’ve really learned on the road and watching other people that have done it, that while this is a great accomplishment and a dream come true, you have to pace yourself. It becomes work after certain point. It takes energy. It’s a dream, but it becomes a job. We’re getting better at pacing ourselves, like, when we first started touring, it was guns blazing all the time. It becomes not as much fun, y’know? So we’re taking it a little slower, trying to enjoy it. We’re enjoying it a little less. Everybody has some solo stuff they’re working on, Dave is always working, Tunde’s got some acting stuff, Gerard has a solo project. So there’s that, and probably another record.

LEO: What are some bands that you would like to collaborate with?
JB: There’s so many. Just did a remix with Gang Gang Dance, which is pretty awesome [on Read Science, a new digital-only EP, out now]. They were honestly the best thing I saw at Coachella. Also, I really love The Clipse. I think somehow, someway we’re gonna figure out something to do with them. We’re doing some shows with Animal Collective; I’m a big fan of theirs. Anything weird that comes up. It’s not really who I want to work with, more what comes up, like, “Wow! That sounds great. Let’s do it!”

LEO: This is your second Louisville show in the last couple years. Is it a different experience for you coming back, or is it just another show?
JB: Totally nerve-wracking man, like, why did I agree to this? [Laughs] I mean, I really love that city. That city taught me a lot. Some of the most incredible, creative people I have ever met in my life are [there]. I’ve been in New York for a long time, and I just realize that I love to come back to people I met there …

If you’re not from Louisville, you don’t think of it that way, but it is — it has that kind of caliber of artists there. So I have a lot of respect for people who are there. So when I come back, it’s kind of like, uh oh, I’m really terrified of making mistakes. I’m gonna have people looking like, “You’re representing Louisville now! You have to step it up!” And never mind all my relatives, family and all that, so it’s a little daunting … I don’t know. It’s a little difficult going home. Just tell everyone, anyone reading this, be nice. No matter what, just be nice. I’m doing the best I can.