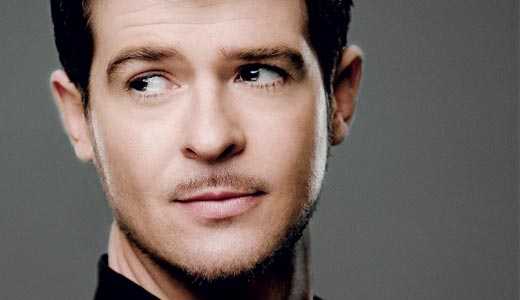 Robin Thicke does not come from a strong soul-music lineage. The son of actors Alan Thicke and Gloria Loring was never top-of-mind in the biz. Yet, with his third release, Something Else, the artist formerly known as “Thicke” has established himself as one of the few Americans left who truly understands the soul classics of the ’70s and ’80s.

Incorporating elements of Marvin Gaye’s most delicate falsetto as well as the oft-neglected, post-disco soul subset known as boogie, Something Else defies expectation and places Thicke among the elite of today’s soulsters. He’s even done the impossible, recording two songs with omnipresent Li’l Wayne that your writer, no fan at all of the Li’l one, doesn’t hate — nay, even enjoys. The album closer “Tie My Hands” (also on Wayne’s Tha Carter III) features a (for once) coherent rap from Wayne about the tragedy of Hurricane Katrina and its aftermath in New Orleans.

Later this year, Thicke plans to follow up with a new album, his first in which he is relinquishing the producer’s reins to others, an experiment to find new sounds heretofore unexplored.

Jennifer Hudson has lived the roller-coaster celebrity life of a woman twice her age in her short career. Originally seen on Fox’s bubble-gum game show “American Idol,” she was sent packing halfway through the show’s third season. Shortly thereafter, she was cast as Effie White in the film version of the Broadway musical “Dreamgirls.” She won an Academy Award for her portrayal. Upon the release of her eponymous debut album, personal tragedy struck as her mother, brother and nephew were murdered, effectively and understandably derailing her for a time. She has recently emerged, winning the Grammy for Best R&B Album, an armful of NAACP Image Awards, making a handful of television appearances, and now, a tour. Her latest single, “If This Isn’t Love,” now sits at No. 5 on Billboard’s “Hot R&B/Hip-Hop Songs” chart.

Thicke produced “Giving Myself” on Hudson’s album, which is probably reason enough for the two to pair. They co-headline The Palace tonight, which appears to be a lucky date, as a Hudson illness has postponed nearly a half dozen dates leading up to tonight’s show.
Reviews have been strong for the dates thus far. Living up to their reputations for “grown folks’ music,” they are thankfully backed not by tracks but a full band, complete with horns.

It’s a well-balanced show, with Hudson’s vocal pyrotechnics on one end and Thicke’s bedroom prowls on the other. Louisville has been getting far too few R&B shows of late, so support of shows like this (and the summer’s John Legend show, and the just-announced Maxwell date) is vital.