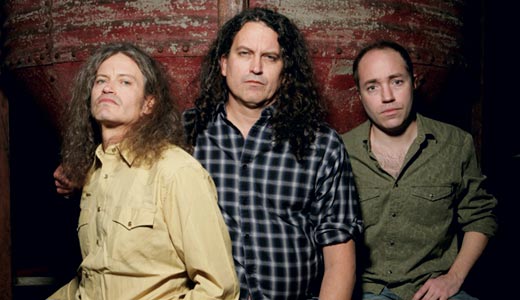 The Meat Puppets cemented its place in rock history when it joined Nirvana on “MTV Unplugged."

While the Meat Puppets may have a story poised for the much-missed “Behind the Music” (complete with drugs, fights, arrests and break-ups), the most important fact of Meat Puppets v2.0 is that they, almost three decades strong, still fully own and master the genre they helped create during the SST days. Their latest, Sewn Together, features the strong melodies, psychedelic flourishes and western twang that made the Puppets Generation X’s response to The Byrds. Songwriter and vocalist Curt Kirkwood discusses their approach to simplicity, the music business, their relationship with Nirvana and the cheese selection at Whole Foods.

LEO: Is the dynamic with your brother Cris any different after three decades of playing?
Curt Kirkwood: Nah, he still sucks. No matter who I’m playing with — and I spent 16 years playing with [original drummer] Derek [Bostrom] and Cris — what I’ve found is that when Cris isn’t around, I still play the same way. [Cris] is more familiar with me than anyone else. It’s a familiar dynamic. There’s plenty of room in there.

LEO: I use the word “reunion” loosely of course, but why didn’t Derek join for the reunion?
CK: I don’t really know. He works at Whole Foods, which is a cool job, and he’s been doing that for a while. I think he enjoys working in a straight world like that, whatever you want to call it — a regular job. But I can’t really tell you. He said he hadn’t played drums in 10 years and just wasn’t into it. If I was working at Whole Foods, I wouldn’t be in this band either. I love that place, and I love their cheese. But I’ve never had a job like that, and I imagine it would be real hard for me. My dad told me it’s too late to get a real job quite a while ago.

LEO: Yeah, but day jobs suck, though.
CK: Well, Derek’s a different person, real laid back. I’m interested in musicians, ya know, no matter who they are — Jessica Simpson, whoever. When you decide that that’s what you’re going to do, that’s fucking nuts. There’s no security in it. I’ve been lucky in it on a small level. The media will have you believe there’s a bunch of these people running around, but the reality is the percentage of people who are that successful is really small. The percentage who actually make a living at it next to those who try is even smaller. My psyche has been shaped by that kind of gambling mentality, and I don’t know if it was there before. I never liked working — I’m inherently lazy. I don’t give a shit, I don’t wanna work. I never cared where the money was coming from; I’d crash on my friend’s couch. That suits me.

LEO: There seems to be a lot of mainstream interest again in, I guess, “indie” or “underground” music, whatever you want to call it. Does today parallel the climate of the early ’90s at all, since you all were, in a way, a part of that?
CK: Well, that dovetailed out of the ’80s for us. It was such a different thing then than now. I honestly can’t tell ya — it’s a strange playing field. The thing that stays similar that I try to tell people is to play music, try to do shows and play good music.

LEO: A lot of people seem to know you all, or were introduced to you, from your appearance on Nirvana’s MTV “Unplugged” performance. In retrospect, did you see that attention as a positive or negative thing?
CK: It’s however the attention comes. I wouldn’t say a better or positive thing, but a more real way of turning people on instead of, say, buying radio slots like the major labels do and the whole intense amount of money on promo. To be able to play one big show like that with cool people like Nirvana was awesome. I knew it while it was happening, just like now, that there was nothing like that. I mean, at the time especially, there was nothing like Nirvana and their independent rise to fame, etc. etc. They were just an amazing band, and to get that opportunity, that’s a once in a lifetime experience. You can play with a lot of people, but everybody asks about that show. And why? Everybody looks at it like this — it was a rare, weird thing, especially after his death. I’m glad to have that touchstone.

Fortunately, we had many years together and had enough going on to not make it like, “Here, let us jerk you up out of the sewer.” The stability of the band was there already, so that performance really helped. I loved it — it was a great night and a really cool album came out of it. I cherish my association and memories with those guys.

LEO: Since the Waterfront show is free, I’m sure a portion of the crowd will not be familiar with the Meat Puppets. What can they expect from the live show, in your words?
CK: Well, we do our normal tricks. We’ll play our songs. I’d say, bring sunscreen and sunblock because it’s healthy. I don’t know if it’s in the day or nighttime.

LEO: It’s in the evening.
CK: Well, from us, we’ll take the stage. We will command it for our allotted time, and let the cards fall where they will. I really don’t know what people see in us, to tell you the truth. We love playing for people who have no idea who we are, that’s always a blast. It will probably be pretty boring in terms of fashion, and then we’ll get drunk. I don’t have much to offer besides the songs. Cris hops around a bit on stage, but I find it irritating if I look at pictures of myself hopping around. What else is there beside the songs, ya know?

The Meat Puppets
w/ The Features
and The Broken Spurs