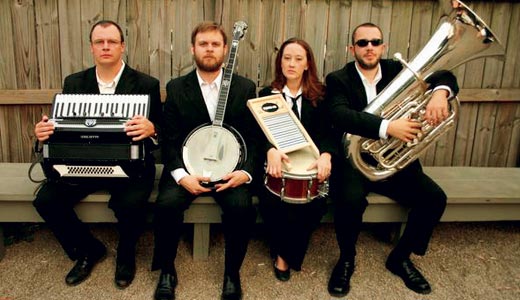 Squeeze-bot appears at this weekend's Art in the Arbor festival. The festival has been running since 1968.

The Billboard-style profile pic at the top of Young DiBiase’s MySpace page touts him as Kentucky’s No. 1 independent artist, and while that title is debatable, his hustle is not.

DiBiase, aka Cory Smith, the CEO of Hooligan Music Group, has a new single, “Rock N Roll,” out now at iTunes, Amazon and other digital distributors, and takes the hype machine to J.T.’s Variety Club beginning next Friday. It bookends his other iTunes mixtape, “Million $1 Dream,” and he’s planning a video blog series “HgTV,” a new music video in June and three more singles.

You can’t blame him: Smith chose the DiBiase moniker after battling three near-fatal cases of sickle cell anemia in less than a year. “Million $1 Dream” was recorded soon after he was discharged from the hospital in December 2007.

And ladies, two of you get into the shows for the price of one.

Art in the Arbor
The two-day Art in the Arbor fest, which has been around since 1968, kicks off at 10 a.m. on May 9 and 10 at Holiday Manor (4936 Brownsboro Road, near Ballard High School).
Among those slated to play are Squeeze-bot, The Generic Alternatives, Hot Club of Derbytown and a special Kentucky Homefront performance from John Gage, Mike Schroeder and Steve Cooley. Proceeds benefit the hospice care provider Hosparus. (See staffpick on page 28 for details.)

Wiggles
Touting itself as the world’s No. 1 pre-school band, Australians The Wiggles are coming to the Palace Theatre Aug. 30 for shows at 1:30 and 5 p.m. Tickets for that go on sale May 8 and range from $18-$35. The group cut a song “Monkey Man” with Kylie Minogue for their album The Wiggles Go Bananas, and have sold more than 7 million CDs worldwide.

Now booking: Quills
Quills Coffee has opened its new location at 930 Baxter Ave., and takes an early jab at live bookings May 8 with the Jacob Duncan Trio (Duncan, Jason Tiemann and Craig Wagner). Showtime is 9 p.m.