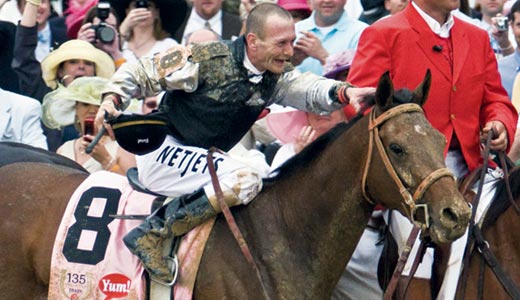 Turning for home in the 135th Kentucky Derby on Saturday, Pioneerof the Nile was just taking the lead when, in our binoculars, we picked up a blur of a horse coming up fast behind. Pink is the color for No. 8, and a quick Googling of our brain for the horse revealed … No Results.

But when the blur darted back to the rail to slip inside a couple tiring horses — when just about every other rider in North America might have straightened out to roll down the middle of the track — the old mind recognized jockey Calvin Borel, King of the Rail, on his patented path to victory at Churchill Downs. This one, as replays later showed, was a near carbon copy of Borel’s win aboard Street Sense in the 2007 Kentucky Derby. This one aboard a 50-1 longshot named Mine That Bird.

Yep. Mine That Bird — whatever that means. A 50-1 shot that would have been 150-1 in any other race except the Derby, in which every horse gets bet a little, whether they’ve won the Santa Anita Derby, like Pioneerof the Nile, or just finished fourth in the Sunland Derby in New Mexico, like Mine That Bird — who then rode 1,500 miles in a horse van hitched to the back of a pick-up truck to get here last week.

And somehow we think the only way Mine That Bird could have won the Derby was with a 42-year-old jockey named Borel finding some way to pass every horse in the race except one on the inside rail. Who else would even try it?

“I took him back, rode a Street Sense race, just like Mr. Carl told me how to ride and taught me,” Calvin told horseback-mounted NBC reporter Donna Barton Brothers, referring to trainer-mentor Carl Nafzger, for whom Borel rode Street Sense two years ago.

“I come clean up the fence the whole way,” said Borel. “Got stopped maybe one time around the turn, but after that he was awesome. I knew if I could find my way through, it was Katie Bar the Door.”

No jockey in modern times is more adept at riding the rail than Borel. He bided his time with Mine That Bird for three-fourths of a mile, then turned the horse loose heading into the far turn. Overhead shots show Borel and Mine That Bird just getting past the next-to-last horse, then flying inside a dozen more around the turn. They came off the inside fence (and into our view) just long enough to pass a snail on the rail, then headed right back to the inside to go after the rest in the stretch — shooting along the rail like (you’ll excuse the expression) a scalded dog.

“He’s a little horse, you know, but when I kept asking him he kept getting closer to them,” said Borel. “I said, ‘My God, he’s going to get there.’ Then when I got to the eighth pole, the horse in the front come off the fence and I smooched to him one more time. And he went in there.”

In fact, Borel did it even more dramatically the day before. On an day when he would also win the Kentucky Oaks by 20 lengths aboard Rachel Alexandra, Borel won the Louisville Distaff by steering a horse named Miss Isella through a hole about the width of a lawn chair in the Infield.

Coming into the stretch Borel located a glimmer of light along the rail, inside odds-on favorite One Caroline. There was just room to go through, but One Caroline bore in to close the gap. Borel pulled on his horse’s right rein and Miss Isella — a big, tough horse — responded with a tough shove back. The outside horse shook its head and veered away, with Miss Isella going on to victory — Borel-style.

Derby Notes: Mine That Bird takes after his small-sized sire Birdstone, a Belmont-winning son of 1996 Derby winner Grindstone, who is by 1980 Derby winner Unbridled. This might be a special line developing.

*No professional handicapper we know even mentioned Mine That Bird, but if you’d wheeled the Official LEO Pick, Pioneerof the Nile, who finished second, for a dollar top and bottom in the exacta, you’d have the 8-16 exacta that paid $1,037.40. We cashed ours at the Coulda, Shoulda, Woulda Window.

*And wasn’t LeAnn Rimes terrific singing the “Star Spangled Banner”? We generally avoid country-twangers like a plague, but Rimes sang perfectly in tune, and instead of belting out the National Anthem, she made a song out of it.