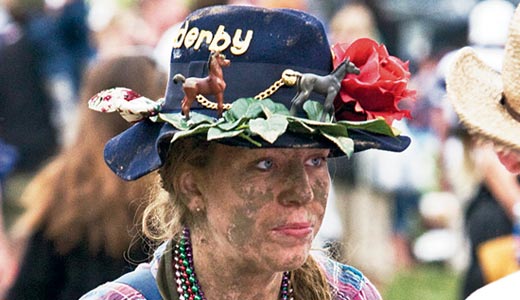 It had been more than a decade since I lived in Louisville at Derbytime.

During my absence, I tried each year to generate interest as the first Saturday in May approached. And while friends were happy to attend my Derby soirees, all too often they made disheartening remarks like, “It’s a little early in the day for bourbon,” “I’m not really into gambling,” and “What’s with the hat?”

As a result, celebrating the Kentucky Derby from afar usually left me homesick and longing for a place where I didn’t have to explain why it’s acceptable for men to wear seersucker on this particular day.

Not long after returning to Louisville last summer, I began visualizing my perfect Derby back home: Secure the invite from a friend who has seats in the clubhouse; buy a classy hat, one that doesn’t look like road-kill or a craft project gone wrong; sip mint juleps, probably with pinky raised.

But it turns out my desire to do the Derby in style was a pipe dream — a bourgeois fantasy not meant to be, at least not this year.

I didn’t get the coveted invite, leaving me to devise an alternate agenda. Before I could weigh in on the matter, however, my cohorts had already devised plans for a more “authentic” Derby experience.

We were going to the Infield.

I was barely 21 the last time I exposed myself to the depravity of the infield at Derby, an event Hunter S. Thompson once likened to “100,000 vicious hyenas going berserk all at once in a space about the size of a 777 jet or the White House lawn.”

Of course I was reluctant to return, but my people were going with or without me. Being a person who admittedly succumbs to peer pressure, I agreed.

My Derby-morning journey began with a dozen or so adults pouring liquor into Ziploc baggies, which were then double-bagged to ensure they did not leak while being smuggled into Churchill Downs.

Armed with ample booze and about 100 ham sandwiches, our crew set out for the bus stop — as adults we know better than to drive after a full day of imbibing. The TARC was on time and unexpectedly empty, dropping us a few blocks from the track. (Unfortunately there were no buses to be found post-Derby, requiring 10 of us to cram into the back of a Ford Explorer bearing the word “shuttle” — written in shoe polish.)

An enthusiastic friend had arrived at the track several hours earlier to stake out a spot; she chose a plot of ground at the Third Turn, the most populated and debaucherous part of the Infield.

I set up my lawn chair and sipped a concoction of vodka and pink lemonade under an ominous sky, which on this day, in this spot, rained nothing but bologna.

The next seven hours in the Infield were as bizarre as I had remembered. To document this spiral into alcohol-fueled weirdness, I jotted down a running list of quotes I overheard (or uttered) throughout the day. Here are a few, minus the names, which are either unknown or are being withheld for the sake of preserving friendships:

• “All I see are degenerates.” —Me, scanning the crowd upon arriving at the Infield.

• “I gotta pee. Where’s that girl’s face?” —Female friend, presumably referring to someone she dislikes.

• “What was that? It tasted like sweat.” —A friend who apparently does not care for warm vodka.

• “I will kick your ass when I wake up if you draw balls on my face.” —Enthusiastic friend who arrived at the Infield early, subsequently requiring a midday nap.

• “I almost got hit in the face with that bologna.” —Friend nearly struck by flying lunchmeat.

• “That’s how swine flu started.” —Inappropriate response to above quote.

• “There’s an Easy-Cheese situation.” —Me again.

Next year, I will once again hold out hope for the coveted box seats, because that’s what’s expected. But if my friend does not come through with the invite, I won’t hold a grudge. I already have a backup plan.

A Napoleon in rags

Blame it on the alcohol