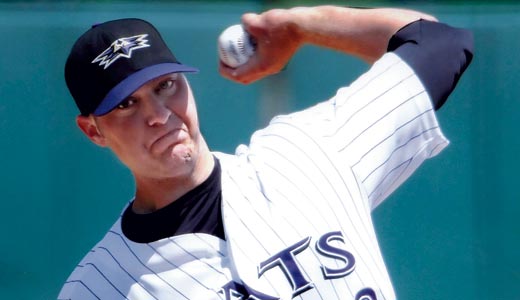 Louisville Bats manager Rick Sweet would probably find it a lot easier to win games if he didn’t have to play musical chairs with his line-up.

Last season Danny Dorn was an outfielder at Chattanooga, but now Sweet has him at first base in Louisville. Ben Jukich came up as a starting pitcher. Now he’s in the bullpen. Same with Adam Pettyjohn, who won 15 games last year, but is now relieving. Kevin Barker divides his time between the field and designated hitter, while Sweet has versatile Norris Hopper hopping around the outfield.

And no one moves more than newly acquired Drew Sutton, who, so far, has played second base, third base and shortstop since being activated on the Bats roster three weeks ago. And he’s not done touring yet.

“We will add first base to that shortly,” says Sweet. “We need to get him some playing time there. And then we will add the outfield.”

Sounds like the guy is being groomed as the next Cookie Rojas, who once played all nine positions in one game for the Philadelphia Phillies.

But it’s just a peculiarity of minor league baseball. Triple-A franchises like Louisville are locally owned teams in the International League, but their players are the “property” of major league clubs like Cincinnati, which flows its talent through its minor league system with one goal — to come up with a 25-man roster that will compete for the National League pennant.

Sweet, who has won more than 1,300 games managing in the minors, including 303 in four years at Louisville, understands exactly how the organization works, and what his role is within it.

Sutton, for example, spent five years with the Houston Astros organization before being traded to Cincinnati. With the Astros, he played second base.

So why not leave him at second?

Because the Reds already have a star second baseman and they’re looking for help at shortstop and third.

“We want to get a feel for him,” says Sweet, noting that Sutton was late starting this season after a bout with mononucleosis. “We have not seen him. We want to see what his best positions are. Remember, he’s played mostly second base, and we have a Gold Glove, long-term guy, Brandon Jenkins, playing second base for us in the big leagues. So that’s always a part of your thinking when you start doing stuff like this.”

Which seems to be fine with Sutton, a switch-hitter who hit .317, with 20 home runs and 20 stolen bases at Corpus Christi (AA) last season  — and, like every other 25-year-old, is itching to get to the majors.

“What you’re trying to do,” says Sutton, “is come to the park and do whatever your job is for the day. Trying to move runners, hit line drives, use the whole field. You’re trying to make routine plays, make the smart decisions, and play good, solid, fundamental baseball.”

The other night playing shortstop, Sutton ranged deep into the hole to backhand a scorched grounder, pivoted and threw a long, one-hop strike to first to nail the baserunner. Looked good! Our shortstop!

The next night he was at third.

“We want to see where they fit best,” Sweet says. “If I get a phone call, and they want, oh, Sutton to go to the big leagues as a third baseman, it’s my job to make sure he’s ready to play third base. Jay Bruce came up as a center fielder. I played him in right and left, and now he’s the Reds’ right fielder.”

Across the diamond, Danny Dorn broke into pro ball in 2006 leading the Pioneer League in hitting — .354 at Billings, Mont. Now he’s playing first base for the first time.

“This is Dorn’s first opportunity at this level, and we’ve made it harder for him by moving him from the outfield to first base,” says Sweet. “And that’s a tough move.”

After a slow start, Dorn recently cracked two home runs in a game and was all smiles in the clubhouse.

“It does feel good to get the home runs,” admits Dorn. “I’d been struggling. But I’m just trying to get that feeling back and get some good swings.”

Then go out to first base with a new glove on your hand.

“If you strike out, you gotta leave that in the dugout,” says Dorn. “You got to be ready to play for the pitcher. The worst thing you can do if you’re not hitting is take it out there on the field and then screw up defensively. That hurts the entire team, moping about the strikeout you just had.”

Speaking of strikeouts, the Bats have at least one guy who hasn’t changed his position — starting pitcher Matt Maloney, who was 11-5 last season, with 132 strikeouts. On the same night Dorn was swatting home runs, Maloney struck out 10 Yankees in seven innings, notching the victory.

“Yeaaahh,” said Maloney after the game, with a big grin crossing his face — obviously savoring the memory of hitters gone fishing for pitches that fooled them.

Like many young hurlers, Maloney arrived with a fastball. But he knows he needs more than a blazer. Top hitters just time the heat and smoke it.

So the 25-year-old left-hander is mastering the art of changing speeds. Now he’s got a “change-up” that looks like a fastball coming out of his hand, but comes in about 10 miles per hour slower — then drops off the table at the plate.

“I told the guys I’ve made some adjustments with my windup, shortened my stride so I can get a little better extension,” explains Maloney. “Getting a little more fade and depth, so they’re swinging at some bad pitches up there.”

That’s right, fade and depth — for pitches that look like strikes but end up in the dirt.

It’s the game within the game at Triple A, with prospects like Maloney learning a new pitch, and Sutton and Dorn learning new positions while facing the toughest pitching they’ve seen. In the long season at Louisville, the players are works in progress — just this far from Major League baseball.