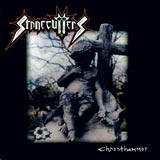 With song titles like “Christhammer” and “Waverly” (named after the abandoned, haunted Louisville T.B. hospital), Stonecutters serve up darkness-a-plenty with their new release. Along with the morbid lyricism, the group does a stellar job of melding a lot of influences into a cohesive act. I could hear traces of early Sabbath followed by the ragged riffs of Iron Maiden. And the Cutters aren’t afraid to throw in nail-biting solos either, something lacking in the Louisville music scene. Brian Omer’s sludgy vocals, steady and unyielding, are a lighthouse in the darkness of intricately plotted and paced musical chaos. Despite the chaos and mind-blowing riffs, the choruses are extremely catchy, setting them apart and ahead of like-minded acts. Stonecutters play an all-ages show at Skull Alley (1017 E. Broadway) on Saturday, May 16.