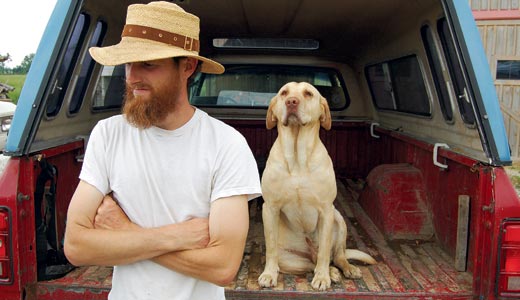 Ralph Packard walks into his barn carrying a five-gallon bucket filled with small, yellowish pellets of feed. The swine — young, inexperienced and craving anything to eat — swarm him, trampling the plastic feed trays. They’re losing themselves in the pursuit, all squeals and snorts. At this stage, everything is food. They’ll chew on your shoes if you stand close enough.

Packard, who with his wife, Kathy, owns Misty Meadows farm, a 28-acre swath in Payneville, Ky., in Meade County, will raise them for slaughter. He’ll pack the meat into his freezer, hitch the trailer to his late model Dodge pickup, and drive it to Louisville, where he’ll sell the meat at weekly farmers markets. It’s a ritual the Packards have consummated regularly since 1989, when the Massachusetts native and his wife settled into their bucolic farm 70 miles southwest of Louisville.

But if a new federal rule takes effect, the Packards could lose their modest livestock operation and, perhaps in turn, their farm.

Like most small farmers, the Packards dread the day when the United States Department of Agriculture institutes its National Animal Identification System, which would require farmers with even modest livestock operations to tag and track every animal on their premises. Farmers would have to track everything from the co-mingling of livestock to basic daily movements — risking $1,000 daily fines for each unreported animal.

At an estimated cost of anywhere between $5 and $50 per animal for a computer chip, reader and tracking software, as well as the untold labor hours counting chickens, cattle, swine and a host of others, the program teases out doomsday rhetoric from even the most seasoned farmer.

“It is strictly to be used as a tool to get rid of the small guy, period,” Packard says. “It’s punitive.”

The USDA has offered a couple justifications for NAIS, which dates back some five years. At first, officials said the program would open U.S. producers to foreign meat markets by allowing more streamlined trading with countries like Japan and Australia, both of which use a government-sponsored tracking system akin to NAIS.

But with the national hysteria concerning outbreaks of contagious disease — avian flu and hoof and mouth disease, as well as the record-setting recall of 173 million pounds of commercial American beef last year — the federal agency shifted its focus to the public health realm, arguing that the ability to trace contaminated meat beyond the processing facility and all the way back to the farm would result in a safer system.

This logic seems to ignore the broader problem, which is that massive, industrialized livestock operations — known commonly as Big Ag — are actually facilitating the contamination of meat and spreading of disease by overcrowding animal lots, feeding animals the unused parts of other animals and generally disobeying the natural order in favor of a supremely efficient, mechanized process, one that also happens to be responsible for so many of the fantastically easy dining options Americans know and love.

But more immediate is how NAIS would shift the burden: While Big Ag operations would be required to tag each lot — one for 50,000 chickens, say — small farmers have to chip every animal they own.

“The big boys — the factory farms, industrial farms, however you want to portray them or call them — probably could benefit from a program like this,” Packard says. “But what they’ve done is they’ve turned it around and they’ve decided to use it as a tool to remove the last [of] what they consider opposition, and that is the growing movement for local food, sustainable food, and things of that nature.”

Walter Jeffries is a Vermont farmer who runs NoNAIS.org, one of a few websites devoted to public opposition of the program. He argues that because small farmers don’t typically export meat, they should be exempt from the program.

“If they want traceability they should create their own private, self-funded voluntary system,” he says. “The vast majority of farmers don’t export, won’t benefit from NAIS and shouldn’t have to pay for it or participate.”

The state Department of Agriculture supports the concept of NAIS, but with a catch: They, too, advocate a voluntary system.

“The need for traceability in the food system is a dire one,” Bill Clary, director of public relations for the department, says. “We support the concept behind the National Animal Identification System with the proviso that it remain a voluntary system. We are not in favor of it becoming a mandatory system at any time.”

Clary added that NAIS should be “designed in such a way that it meets the needs of producers of all sizes.”

And last week, the Livestock Marketing Association, which represents some two-thirds of registered U.S. markets, called for the USDA to make NAIS voluntary.

Jay King owns Ridge Acres, a 350-acre farm a few miles down the road from the Packards, where he raises an impressive variety of livestock, from chickens and pigs to goats and buffalo. He comes to Louisville twice a week to sell at markets, including the Smoketown farmers market.

King says keeping his 1,200-plus chickens accounted for under NAIS would be a full-time job in and of itself.

“What would [NAIS] do? It would put me out of business,” he says.

King and other farmers say their operations, which are relatively small and utilize local and regional distribution channels, are so different from Big Ag that the USDA should officially recognize a distinction.

Or, in Packard’s words: “We’ve got opposite beliefs. I think it’s time we go our separate ways.”

Tom Vilsack, the U.S. secretary of agriculture and former Iowa governor, is visiting the country’s farming communities on a six-city “listening tour” about the National Animal Identification System. Vilsack and other officials will be in Louisville Friday, May 22, at the Crowne Plaza Hotel (830 Phillips Lane, at the airport). The meeting begins at 8:30 a.m. and will last until late afternoon. The public is invited, and some protesting is expected.