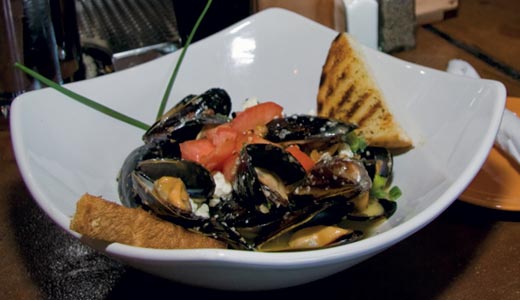 Browning’s is back. The brewpub in Slugger Field, with its upscale sister restaurant Park Place on Main, had abruptly closed back in October. Although Browning’s continued brewing craft beer for outside sales, Louisville Bats fans were left high and dry.

Now Chef Anoosh Shariat, backed by investors, has put up nearly a half-million dollars to revamp the restaurant and revise its menu. Browning’s reopened May 12. The Park Place space is available for private parties.

There’s little change inside the eatery or on the sidewalk patio facing East Main Street. The menu remains on the upscale-casual side, with items ranging from $6 to $16 and featuring many old favorites such as pub wings, “black and white” hummus and a Hot Brown. New additions include a salsa-and-guacamole appetizer, fried macaroni and cheese, a grilled Portobello mushroom sandwich and Southwest chicken pasta.

Brian Reymiller is back as brewmaster. He returns Browning’s classics like She-Devil IPA and Hildegard Helles to the pub. Other favorites will be served in rotation.

My friend Laura and I stopped in on opening night — a beautiful, sunny evening, to the delight of all involved — and enjoyed the new Pub Ale. It’s a malty, dark brew with light body and mild flavor, and our server declared it a first-day favorite. One employee said the ale was a happy “accident” originally intended to be an ESB, a different and far bitterer brew.

Browning’s is working with other area brewers, including Bluegrass Brewing Company and Cumberland Brews, to offer each other’s wares on draft. In happy news for beer-geek ball fans, She-Devil will also be sold inside the ballpark during games, a surprising concession from Anheuser-Busch, which has long monopolized the beer offerings in Slugger Field.

Laura and I started with the salsa-and-guacamole appetizer ($6). Both dips were fresh and pleasant, if unspectacular, and the triangular chips were interesting and salty, like a cross between a standard fried corn tortilla chip and a kettle chip.

For our light dinners, Laura chose a Caesar salad ($7) and I ordered Pub Mussels ($10). Laura’s ample salad was fresh, with plenty of creamy Caesar dressing and homemade croutons. It came garnished with what appeared to be a thin, crisp focaccia pancake, a tasty addition.

The mussels, steamed perfectly and topped with bacon bits and blue cheese crumbles, were a home run. If I’d had room after eating the 20 or so they served me, I would have nabbed a second order.

All in all, Browning’s scored a successful return with relatively few opening-night kinks.

It’s open Monday through Friday for lunch and dinner and Saturday for dinner. Let’s hope that success and public support might persuade Shariat and his crew to expand the brewpub’s hours. Sunday afternoon and evening hours during Bats home stands would be a great start. —Kevin Gibson

Tuning up our taste buds at Zaytún

Want a fried whitefish sandwich on rye that’s as good as you’ll find in this fish-loving town? Want a gyro that’s bigger than your head, piled high with excellent Greek-style grilled beef and lamb, so big you really need to eat it with knife and fork?

Never before has one been able to enjoy such disparate ethnic goodies at a single table in Louisville.

Let’s hail the arrival of Zaytún Mediterranean Grill, a small, casual but attractive eatery that’s packing in crowds for lunch and dinner at the small Highlands spot that once housed Andrew’s, a forgettable diner.

There’s nothing forgettable about Zaytún, which brings together a bit of Persia and tastes of Lebanon, Egypt and Greece with a good shot of the U.S. of A.

Born in Iran and raised in the U.S., Pouranfar’s blend of cultures is reflected in an affordable bill of fare with about 16 savories that range in price from $3 (for pita crunchers, a snack of fried and seasoned crunch strips of pita with creamy tzatziki sauce) to $9 (for Hot Bite Kabobs, nearly a half-pound of ground Angus beef meatballs skewered, grilled and served on flatbread). Spiced Persian tea is available both hot and cold; beverages also include Coca-Cola products, a short wine list and a good selection of microbrewery beers.

We dropped by for weekday lunch (the same menu runs through both midday and evening hours) and, tempted beyond endurance, ordered way too much.

The Baba Ghanouj ($4.50) is the Persian version of this classic eggplant dip, made not with tahini sesame seed paste but a fresh, finely chopped blend of seasoned roasted eggplant with onions and garlic, garnished with tzatziki sauce and diced tomatoes, served on chopped lettuce and surrounded with eight star points of warmed pita.

The fried fish ($6.25), which Pouranfar said is based on his father’s recipe from Sharom’s, was a well-executed example of the Louisville classic. Mild, fresh white fish was cloaked in a light, crunchy, golden-brown coating, grease-free, and served on decent grocery seeded rye with homemade tartar sauce on the side.

The classic gyro ($7) is a variation of the usual Greek style; it’s served atop a large, oval “Euro-style” flatbread, thicker and more bread-like than traditional pita. It’s hinged so you could eat it out of hand, but I wasn’t about to try. The generous toppings — including thin-sliced, savory gyros meat, lettuce and tomatoes and red onions, plus add-ons of your choice (I went with feta cheese) — are piled so high that I couldn’t see opening my mouth that wide. I tucked into it with knife and fork and got through about half before calling for a doggie bag.

A shared wedge of baklava ($1.50), small but very rich, phyllo dough soaked in honey and stuffed with chopped pistachios, was as good as I’ve ever tried.

I’m told Pouranfar has signed a lease for the old Diamante restaurant space a few doors up the block, with plans to open a more upscale but still-affordable restaurant there. After lunch at Zaytún, I figure I’ll be among the first in line at the new place. —Robin Garr

White Castle is giving away free samples of its new BBQ Pulled Pork Slider this month. Just like the classic WC burger, but topped with pork barbecue! Free, one to a customer, with an Internet coupon! Naturally I was drawn to this confection like a moth to the flame. I headed for the Aluminum Palace as fast as I could print off the coupon from www.whitecastle.com/pulledpork.

The results? Well, the little fellers weren’t awful, but neither are they likely to win any major barbecue contests. Think tiny Sloppy Joes, falling-apart pork swimming in thick, sweet and slightly spicy sauce, served unadorned on a White Castle bun.

OK, I’d eat another. Or several. Even at the regular 99-cent price. But I’ve rarely met barbecue I couldn’t eat. —RG