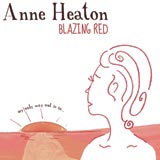 The girl who sat next to you in sixth period trig, the one with the Ani-inspired boots and the Boys for Pele T-shirt, wants you to like this album. “It’s confessional,” she whispers in your ear, “way better than that other crap you listen to.” You’re holding a copy of, say, Bonnie “Prince” Billy’s Master & Everyone. These things always get transferred into gender wars, so you play Anne Heaton’s latest Blazing Red a couple of times, but there’s not really anything to hold onto. Sure, it’s melodic and frighteningly confessional at times, but people are usually only interested in hearing confessions if they’re juicy. It’s not a bad album, but it’s not turning your crank either. It’s just pretty. And, when you tell the girl from trig this, she looks at you like you just kicked her dog. “I don’t think you understand,” she says before walking with determination out of the room. You could tell her that the Anne Heaton album was pretty, but that’d probably just make her more upset.