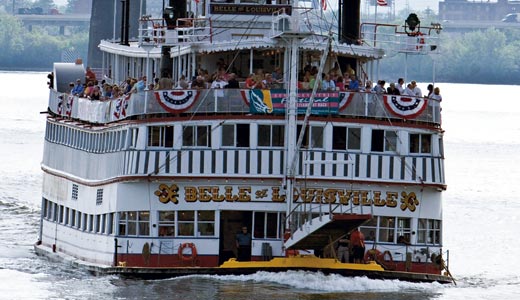 As I sit here and reflect on the week that was, I feel dazed, hazed and extremely confused. My liver throbs. My body is tattooed in bruises. My lungs expel char. I survived another Derby, but only barely. I’m too old for this shit, yet I dove headfirst into the debauchery again. I suppose the anticipation of the first Saturday in May erases all lessons learned. This year I wanted to stay far, far away from the track and hang with the locals. My high from celeb sightings has waned — I’m more up for having a good time with friends than donning a ridiculous hat and stalking Paris Hilton in a bathroom. Of course the lure of an open bar trumps all.

Tuesday: Chow Waggin’
with the Pygs

Ah yes, corn dogs and stale draft beer — nothing says Derby like the Chow Wagon. This year there were two stages of live music, and on this night it was the ’80s cover band the Velcro Pygmies vs. R&B twister Keith Sweat. Let’s just say it was easy to tell which concert was where. (Confederate flags and teased hair to the left, please.) Sounds of Journey, Poison, The Go-Go’s and GNR never sounded sweeter than on the waterfront on a crisp, spring night.

Open Bar Alert No. 1 — “Damn” is the first word that comes to mind when reflecting on this night. “I’m” and “sorry” are the other two. You see, I was on assignment — report from the Belle of Louisville during the Great Steamboat Race. Nowhere in that command did it say: “without drinking bourbon.” You can view the footage at barbelle.leoweekly.com — but let’s just say it was a smashing success, albeit slightly embarrassing for people unaware of my “Sarah” personality that surfaces when I’ve had eight too many. I managed to get insulted by the mayor, warm up to some Derby Princesses and make a love match for Larry Birkhead. My plan was to sober up at the Chow Wagon and meet with friends. Sober up I did not — but I certainly made a slew of new friends, including the security guard at the gate, the guy backstage at the Charlie Daniels concert and the Fried Oreo lady. The friends I was meeting? Yeah, I’m pretty sure they jumped ship.

It was a bit difficult to wake Thursday — and by “bit” I mean “Where the hell am I?” and “Hey, weren’t you backstage at Charlie Daniels?” I crawled into the shower to seek forgiveness, grounded myself from bourbon and apologized to anybody who may have seen me out last night — even a few who didn’t. I put the blame squarely on the free alcohol and moved on. Tonight was Oaks Eve — and I had another open bar to attend. It was a VIP event for Derby media, but all I heard was “free food and drinks.” While sipping from my first mint julep of the season (oops — so much for no bourbon), I shimmied up to the mashed potato bar, plopped a spoonful into a fancy martini glass and made my way to the nearest table. A nice man stood there while two others huddled around him. I thanked him for making a spot for me and dove into the taters. “I’m Dan Mongiardo,” he said as he shook my hand. “Hmmm, that name sounds familiar,” I thought and then wondered why the other men didn’t acknowledge me. “Shit!” I said in my inside voice. “This dude is a politician, and these guys are his security. But these potatoes are so good.” We stood and talked about the newspaper business until my julep was empty. (BTW: Dan is Kentucky’s Lieutenant Governor.)

Next up was the street party at Fourth Street Live featuring DJ Samantha Ronson (aka “I boned Lindsay Lohan”). Like a monkey flinging poo at onlookers, Ronson stood behind Plexiglas and threw out some fairly decent tunes to get people dancing. The party soon moved into Hotel, which is where I stopped gawking at the skinny celeb and focused on my mean dance skillz. I’m pretty sure she noticed.

Friday: Locals do It the Best

I hopped, skipped and stumbled into a few local parties — where the mood was quite a pleasant change from the uptight VIPers. Friendly faces, free beer and a karaoke machine commandeered by a crazy New Yorker … what more could you ask for? A gin at the Monkey Wrench and Taco Bell? Check, check.

This party was my favorite of the week. Good friends, interesting strangers, corn hole, hooch and Jell-O shots make an infectious mix. I brought along a game of Old Maid, a 24-ounce bottle of Miller Lite and a six-pack of Bud Light Lime to pass the time and only thought about a horse race once, when I picked Atomic Rain to come in last. Although not every activity and conversation I was involved in is etched in my memory, I do fondly remember balancing a large container of cheese balls on my head, shotgunning a Jell-O shot with a friendly partygoer and singing an a cappella version of Reba’s “Does He Love You?”

A Napoleon in rags

Home for the Derby