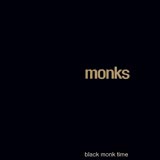 The Monks’ Black Monk Time bursts from the speakers as a bacchanalian humdrum of Cold War paranoia and exuberance. It’s rabid, berserker, frothing-at-the-mouth garage rock with a discipline that would get dap from St. Aquinas. Undoubtedly one of the greatest albums of the ’60s, Black Monk Time is the work of five GIs stationed in Germany who just never left. On stage, the group would dress as monks: bald, cassocked, with nooses for neckties. While rock in the States was basking in melody and harmony, The Monks found release in the beat. The rhythmic chopping and off-kilter bellow-screech of lead man Gary Burger (current mayor of Turtle River, Minn.) perpetuated a tribal rock ’n’ roll culture that gave birth to genres like punk and kraut rock. But this is a band without genre: a group incomparable in their delivery and frenzy, adrenalized against the power of when we could have all gone up in smoke. Still, in 2009, It’s beat time! It’s hop time! It’s monk time!